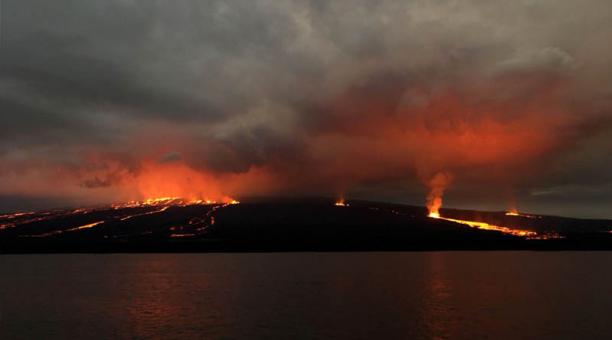 Authorities ruled out on Thursday, June 28, 2018, possible effects on giant turtle colonies and a population of land iguanas on Isabela Island, in the Galápagos archipelago, following the eruption of the Sierra Negra volcano.

This was reported by the Galapagos National Park, responsible for the care of the flora and fauna of the areas surrounding the volcano located in the south of Isabela Island, which was reactivated since last Tuesday, June 26.

In a statement, the Galapagos National Park noted that the four giant turtle populations of the Chelonoidis guntheri species and a population of land iguanas located on the eastern side of Isabela Island are protected because the lava flows are directed northwest of the island.

The Geophysical Institute of the National Polytechnic School and the Galapagos National Park constantly evaluate the changes that could occur in the ecosystem of the volcano area. The Galapagos National Park reported that even one of its guards, Freddy Mosquera, has installed an observation and control post in the sector El Cura, in the upper part of the Isabela, an island that is subject to an “orange alert” code, high caution, on the part of the Secretariat of Risk Management.

In addition, the report emphasizes that access to people around the Sierra Negra volcano is prohibited, until the authorities raise the risk alert. The Sierra Negra is the largest volcano in the insular region that has one of the largest craters in the world, with a diameter of approximately 10 kilometers, said the Galapagos National Park.

Its height reaches 1,124 meters above sea level and its last eruptions are recorded in the years 1979 and 2005. The Galapagos Islands are located a thousand kilometers west of the Ecuadorian continental coasts and were declared in 1978 a Natural World Heritage Site by the UNESCO.

The archipelago owes its name to the large turtles that inhabit it, and its land and marine reserves contain a rich biodiversity, considered a natural laboratory, which allowed the British scientist Charles Darwin to develop his theory on the evolution and natural selection of species. (I)

Fishermen asked in their day more security to work