Eight instructions in motion for crimes linked to Guacho’s gang 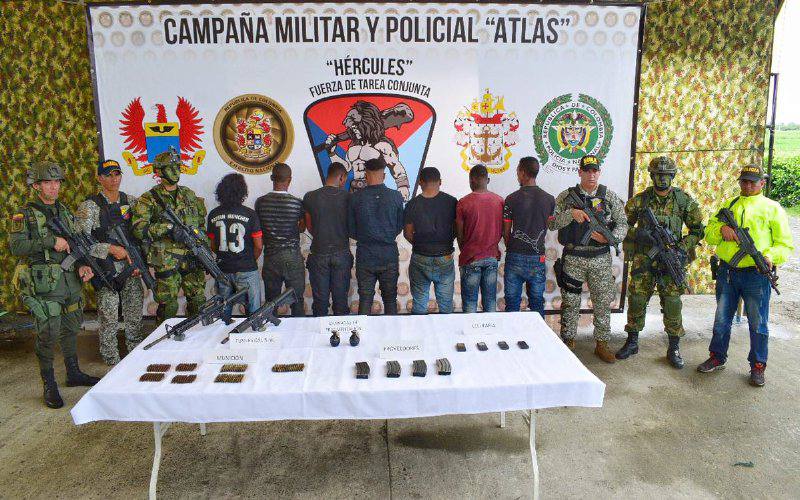 Terrorism, organized crime, illicit trafficking of firearms, illegal possession of firearms, ammunition and unauthorized explosives, kidnapping, murder, narcotics trafficking, are some of the crimes that the Office of the Prosecutor investigates in Ecuador, since last October, and in which individuals close to the criminal group of alias Guacho would be involved.

To date, the Prosecutor’s Office has opened eight fiscal instructions and six previous investigations involving 35 Ecuadorians, 10 Colombians and one Mexican. All were arrested, between October 23, 2017 and April 16, 2018, in twelve operations carried out in provinces such as Esmeraldas and Santo Domingo de los Tsáchilas.

aka Julio, for illegal trafficking in firearms; and alias Curandero and aka Cholo, accused of murder, all Colombians, were the first to be detained (between October 23 and November 5, respectively) within the actions taken against what is now known as the gang of “los Guachos “, led by Walter Patricio Arizala, better known as Guacho.

Cholo and Curandero would have been extradited to their country, according to information from the Prosecutor’s Office, while Julio is being prosecuted in Ecuador.

Arizala, former member of the mobile column Daniel Aldana of the Revolutionary Armed Forces of Colombia (FARC), today is a dissident who covers his narco-criminal activity under the heading of Front Oliver Sinisterra.

This organization has control of a good part of 42,627 hectares of coca leaf crops that are produced in the Department of Nariño, bordering the province of Esmeraldas, in Ecuador.

Before January 27, the date on which the explosion of the first car bomb attributed to Guacho in San Lorenzo, in the Police Command, was recorded, six operations left 18 prisoners, including Patrocinio C., alias Cuco, and Colombians Diego T. and James C.

These three individuals accused of illicit arms trafficking were the same as those requested in exchange for Guacho, by the three members of the El Comercio journalism team who were kidnapped and who were killed.

Against the defendants in this case, on May 11, the trial preparatory hearing will be held.

After Operation Libertador 1, which took place (on March 16 last), the same morning as the detonation of an explosive charge occurred next to the Navy checkpoint in Borbón, according to the authorities, 28 arrests were made between the two they directly affected the structure of the criminal network with which Arizala operated.

For example, on April 5, in Santo Domingo de los Colorados, Geovanny P., aka Amarillo, was arrested. According to police sources, he was 24 years old and the third in command of the Guacho group. The man who was posing as a merchant is investigated today for organized crime and terrorism.

Also the supposed nephew of Guacho and in charge of the security of the family, Ruvén J., along with nine active members of the band dedicated to providing security, information, placement of explosives, storage of ammunition, was arrested in an operation in Mataje, Just the same April 13 in which President Lenin Moreno confirmed the murder of Javier Ortega, Paul Rivas and Efraín Segarra, the members of the journalistic team.

Crisis on the northern border

They have been detained within the operations executed in the area of the northern border. (I)