The province of El Oro, through its Prefecture, presented on Tuesday the  Contingency Plan for the Control and Prevention of  Fusarium  R4T. 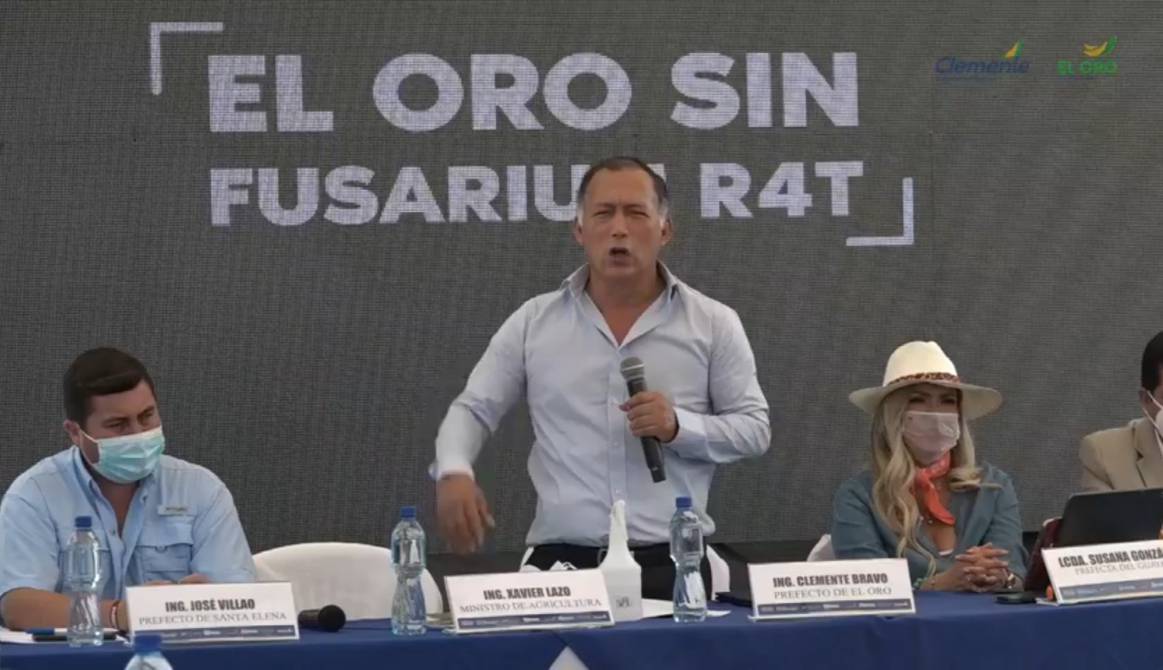 El Oro, which accounts for 41% of the country’s banana trees, presented a plan against Fusarium race 4

The fungus that attacks bananas and other musaceae was already detected in Colombia, in August 2019, and in Peru, in April of this year. Meanwhile, Ecuador remains without the presence of the plague, ensure the  Ministry of Agriculture and Livestock (MAG)  and the  Agency for Regulation and Control of Phytosanitary and Animal Health (Agrocalidad).

The plan was presented in Huaquillas, a border city with Peru, by the prefect of El Oro,  Clemente Bravo , in the company of his counterparts from Guayas, Los Ríos, Santa Elena and Manabí, who met for the first time last week in Guayaquil , to create a common front against  Fusarium  race 4.

This, in a context in which around 36% of banana exports worldwide come from Ecuador. While the province of El Oro concentrates 41% of the country’s producers; Guayas and Los Ríos concentrate large producers with 34% and 16%, respectively. Meanwhile, Manabí maintains an important banana production.

Also present at the presentation were the  Minister of Agriculture and Livestock, Xavier Lazo ; the  executive director of Agrocalidad, Patricio Almeida ; and representatives of the banana sector, such as  Juan José Pons, coordinator of the Banana Cluster, made up of the Banana  Marketing and Export Association (Acorbanec), the Association of Banana Exporters of Ecuador (AEBE), the Regional Corporation of Bananas of Ecuador ( Agroban) and the Chamber of Agriculture of the Second Zone.

Lazo indicated that MAG together with Agrocalidad have also developed a unification process to prevent the arrival of the plague. “There is the network of laboratories of Iniap, Agrocalidad and together with the academy it is the best network in Latin America and the Caribbean,” said the minister, who also spoke about the race 4 commands that are active in Ecuador and the region.

“Please feel confident that what has been done in recent times is precisely to prepare for this very delicate moment for the sector, for the territories that depend on the money generated by the musaceae industry in general,” said Lazo, who warned that if the task is not done well, it can compromise the sustainability of the Ecuadorian economy and dollarization.

For this reason, he revealed that the Fusarium  issue  has priority in the transition process with the incoming government.

“We have done our thing, definitely in this transition process with the incoming government this is priority number 1 to strengthen the budgets,” said Minister Lazo, who suggested to the prefects to unify the budgets for educational communication in the territory.

Meanwhile, the plan includes the creation of the  Committee El Oro sin Fusarium , formed last week with the productive sector of the province; massive training for large, medium and small producers led by international experts, in addition to the placement of three vehicle disinfection arches.