Last Sunday a week away for the Colombians to elect their new president among five candidates, the campaign ended in the middle of a new peace agreement between the Revolutionary Armed Forces of Colombia-People’s Army (FARC-EP for its Spanish acronym) and the Government of Colombia. An afreement on drugs carried out by the current President Juan Manuel Santos.

There was also a scandal around the right-wing candidate, Oscar Ivan Zuluaga, from the Partido Democratico -party led by former Colombian president Alvaro Uribe Velez-, who put aside his agenda to defend himself after the Semana magazine revealed a video that shows his link with the so-called “hacker” Andres Fernando Sepulveda, who was accused of spying emails, make illegal interceptions and selling information on the peace talks between the government and the FARC-EP.

Latest surveys reveal that on May 25, -when the elections are celebrated- the vote intention will favor Santos, with a 27.7%; while the right-wing candidate Zuluaga, will be supported with a 23.9%. However, the election could be defined in a runoff because none of the main contenders would reach 50% plus one of the votes in the first round.

The other three candidates, Marta Lucia Ramirez, by the Partido Conservador, Clara Lopez by the Polo Democratico Alternativo-Union Patriotica, and Enrique Penalosa by the Alianza Verde, have poll percentages of about 10%. 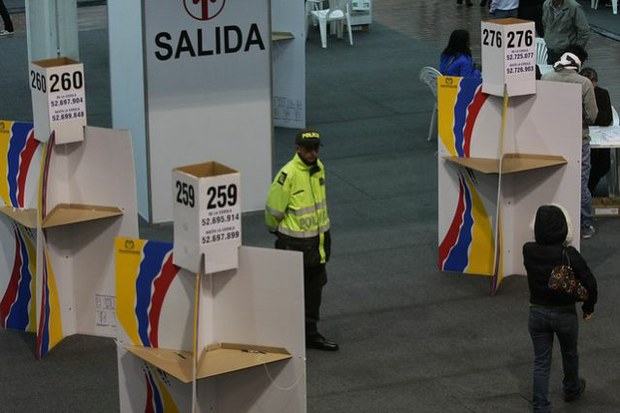