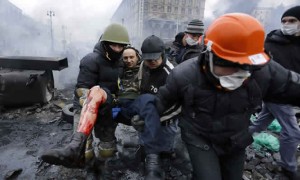 While authorities held in Kharkiv a second round table of national unity, resistance in Ukraine grew yesterday with renewed fighting and violent incidents in the regions of Donetsk and Lugansk.

The pro-Russian bulwark of Slaviansk, attacked by Ukrainian troops since late April, was the scene of armed clashes in the morning.

In addition, with the help of artillery they destroyed a railway bridge in Andreyevka.