Emelec, Independiente and Catolica have a real chance to finish in first place 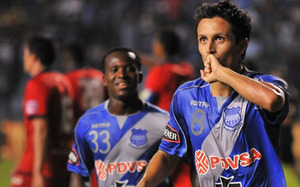 While Emelec still leads the second stage with 34 points, it’s followed by Independiente player José Terán and Universidad Catolica, with 31 points for the three teams. According to the analysis, are the leading contenders to win the second stage.

In addition to the points, the three teams are the best  soccer players at the moment and their campaigns have been regular. Emelec leads the advantage after winning the first stage and, according to the rules, if they win the second they will be direct champions without playing the final.

Meanwhile, Independiente and Catolica, have a chance if they win the second phase, they will play two final games with Emelec to determine the champion.

When compared with the score Barcelona completed last year to take the title in 2012 (42 points, before the last date), Emelec needs add 9 points. However, the chances for the blue team are scarce because they have not narrowed down a distance marked on the tip.

Emelec will have three games at home. This Sunday will receive Deportivo Quito, and also visit Liga de Loja and Deportivo Quevedo, that are considered the last two rivals to play in the Capwell Stadium.

But on the road, the electric team must face Independiente Sangolqui a direct opponent in the bid to secure the lead. And in the penultimate round for qualifying they will play in Manta.

A U. Catolica also have three games at home against Liga de Loja, D. Quevedo and Liga de Quito. Visiting, the picture is also complex since they face Manta and then Barcelona.

Instead, Jose Teran should measure Macara, Emelec, D. Quito, Liga (L) and Manta, a journey that may be complicated. Since they have to face Ambato, Quito and Loja as a visitor.

Inflation in October was 0.41%