Emelec: The Ecuadorian Champion for 2014, after winning 3-0 against Barcelona 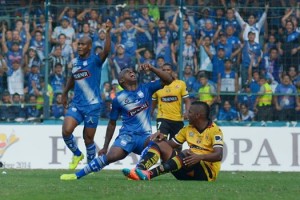 Today, Emelec defeated the Barcelona Sporting Club 3-0 in the rematch for the title of the Ecuadorian Soccer Championship of 2014, at the George Capwell Stadium.

Angel Mena, at minute 21, opened the score with his first goal to give the victory to Emelec.

Miller Bolaños received the ball and threw a pass between the lines to Robert Burbano, forcing the keeper Máximo Banguera to go out and bring down Emelec forward inside the area. Referee Carlos Vera let the game continue and Angel Mena took the ball and scored while Maximum Banguera was returning to the goal post.

Barcelona tried to react with advances from Christian Suarez, who was easily controlled by Oscar Bagüi.

Miller, in another arrival by the middle, managed to do a strong kick, but the ball crashed into the horizontal (76m); at the 80 minutes, a center of Mena was used by Miller, who rose and  made the 2-0 (80m).

At minute 86, the Mena-Miller duo sealed the victory. Mena did a pass to Miller and he scored the last goal that gave the victory to his team.