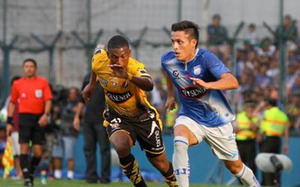 With their intact chances of being champion by winning this second stage, as it did in the first, the blue team (Emelec) added a point in the difficult commitment against their historic rival, Barcelona.

The new point awards the electric club 34 points, three more than his escorts Independiente and Universidad Catolica, which tied on last Saturday with two goals.

Five dates near the end of the second stage of the championship, Emelec has uncomplicated calendar, since they will have to face the team of Quito at their home next day and then visit Independiente, a match that is considered key to get the points needed and move to its 11 championship history.

Regarding the classic match, the media said that it was an intense game that had numerical advantage from the millionaires since the 8th minute when Jose Luis Perlaza was expelled, but that did not diminish the performance of Barcelona, which on several occasions had the opportunity to take the lead, but they failed to achieve it.

On the next day, Deportivo Quito wille receive Emelec, which won 3-0 at the virtually fallen Macara, while Barcelona will visit El Nacional, which lost 1-0 against Deportivo Quevedo.

The other games of the date, Liga de Loja won 2-1 to Cuenca and Manta tied with a goal with Liga de Quito.

Emelec, Independiente and Catolica have a real chance to finish in first place