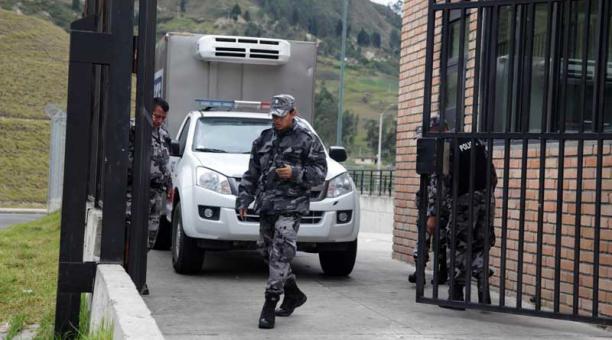 The death of the main person investigated for the crime of the littlle Emilia untied a series of questions. In Loja, people asked why they did not take the safety precautions to protect the life of José Nero? What did he know? No one noticed what was happening? He and two other detainees arrived at the prison in Turi, Cuenca, at 05:30 on Thursday, December 21, 2017, and at 06:15 the first report that the body was found without vital signs was known.

The transfer from Loja to Turi began at midnight on Wednesday, after a risk report was known. The idea was to prevent the three defendants from being attacked by Loja inmates. In a video, which was leaked on social networks, we observe how the detainees waited for the suspects. Some had sticks and others said they would end the lives of the three. At midmorning, the Minister of Justice, Rosana Alvarado, spoke in her office in Quito. Based on the data collected so far it is said that it would be a possible suicide, perpetrated with one a piece of his clothing.

He insisted that to give a final report it is necessary to have the written report of the specialist who worked on the subject. Nero was not alone in the cell, since he was locked up with the man and the woman, also prosecuted for the murder of Emilia. Then, Alvarado was asked several questions. Why were the three people in a single cell? In a provisional cell. Why the other two prisoners didn’t did not alert of the event? They say they fell asleep. Was it not necessary for them to be with handcuffs? They were without handcuffs, because that makes it difficult to rest. President Lenin Moreno asked Alvarado and Interior Minister César Navas to deepen the investigations. “You have to see well if he did not commit suicide. Do not forget that he belonged to a criminal organization, which maybe does not care at all to about an informer.”

The Office of the Prosecutor opened investigations into a possible trafficking in persons, in addition to rape and murder. The governor of Loja, Eduardo Jaramillo, warns that the link with these crimes was based on the photographs and videos that were recovered at the time of the raids. Now, that material is part of the investigations. “It continues with raids and the search of the rest of the criminal organization.” What Minister Alvarado now expects is that the

investigations lead to know which people were more involved in this act and what other suspects may exist. If it is proven that there were human trafficking, the two remaining defendants could receive sentences of up to 26 years. The rape (with the death of the victim) and the murder have the same penalty. The Penal Code (article 55) authorizes the accumulation of sentences for up to 40 years. The judicial authorities have said that all the necessary evidence will be gathered to clarify what happened.

For now, the family and Loja will dismiss Emilia. On Thursday they received the body that was in the Forensic Center. From there, the white coffin was moved to the Colegio Mariana de Jesús, for its wake. There arises a burning chapel. Dozens of bouquets of white flowers make up the altar, which is also covered with curtains of the same color and a large photograph of Emilia. In that space rests the coffin with the remains of the girl. Her shattered and incinerated body had been thrown near a stream. Emilia will be dismissed on Friday at 13:30 from the Cathedral of Loja. There, Bishop Alfredo Espinosa will preside over the last mass of the present body to then bury her. (I)

Legislative and Executive prepare their reforms to the LOC