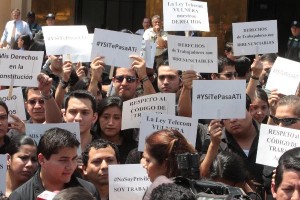 Workers from Claro and Movistar held a protest yesterday in the cities of Guayaquil and Quito. Their claim was the Government’s attempt to reduce its profits from the actual 15%  to a 3%, so a 12% go to the State.

Hugo Carvajal, Spokesman for Claro employees in Guayaquil, said that they hope President Rafael Correa remembers the conversation they held a few weeks ago. “We’re going to insist on the dialogue”, he said.

In Quito, Movistar employees held a demonstration in front of the main building of the company. ‘And if it happens to you’ was the motto.

Workers indicated that all the coming Fridays they will reunite on the streets to demand that the Government desist.

The seedling from Movistar employees culminated with the release of black balloons. “Without our work, the radio spectrum is just air”, they said.