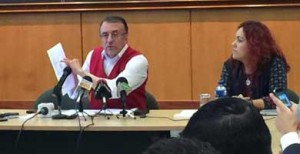 The former president of the Universidad Andina, Enrique Ayala Mora, in reply to the accusations of President Rafael Correa, said that he is lying by claiming that his monthly income in that position was $ 12,000, and that these resources came from public resources, besides charging a double waige.

At a news conference, Ayala explained that the president´s remuneration was paid with self-management incomes of the University. In addition, he (Ayala) nor any other official of the Ecuadorian University has requested a diplomatic status, or tax breaks.

Instead, he said that the president has never explained why each member of the _ Yachay board earns more than $ 16,000, in total the Yachay board costs at least $ 65,253.60, everything is paid with public funds.

“Correa lies. If he thinks I have violated the law or have committed a crime against public funds, he´d rather file a lawsuit and send me to jail. My hand will not shake to prosecute the corrupt individuals so they go to jail for their actions during this regime riddled with debt, waste and corruption.”