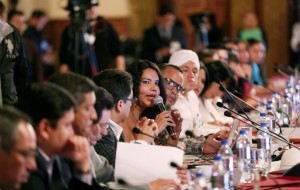 President Rafael Correa has held meetings for four hours with LGBTI (Lesbian, Gay, Bisexual, Transgender and Intersex) communities in the Yellow Room of the Government Palace to review progress on issues of justice, equality, discrimination, education and health.

Diane Rodriguez, chairwoman of the National Federation of LGBTI organizations, stated the importance of the adoption of the Organic Law for Identity Management and Civil Data that allows people to include in their identity cards, if they want, a different genre to which they were born. “It is a unique global pioneer law,” said Rodriguez.

One of the achievements listed is that transgender people will be able to vote in the women and men sections. Regarding Health, a campaign on breast cancer for lesbian and transgender men will be carried out, according to the official website El Ciudadano.

In terms of work, through the Inclusion Program of Vulnerable Persons, the LGBT population issue will be targeted. As well as high school education, especially for transsexuals.