Episcopal Conference requests “guarantees of freedom” to the government 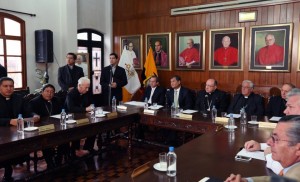 The Ecuadorian Episcopal Conference (CEE for its Spanish acronym), in a statement asked the government of President Rafael Correa to “overcome by the same official channels” the situation it generated with the note verbale of protest sent to the Apostolic Nunciature complaining about the “political” views of Monsignor Antonio Arregui, Archbishop of Guayaquil.

The CEE states that “in the present complex situation of the country, the Bishops of the Episcopal Conference can not stop offering their collaboration with the Ecuadorian people to address current challenges, valuing differences, promoting dialogue and participation without exclusions.”

Therefore, the note verbale of the president “has not compassion with the respect to this freedom typical of the Church. This step (overcome by the same official channels) will favor, in concrete terms, the conditions of dialogue and respect,” said the Conference in the statement posted on its website after an assembly of bishops held in Quito on Thursday.

The CEE welcomed the approach that emerged from the Ministry of Foreign Affairs and the dialogue held with Foreign Minister Ricardo Patiño to overcome the impasse and said that in this way the desire to “overcome the situation created by the unfortunate statements of recognized exponents of the Executive branch, since these imply a limitation of the rights of the pastors of the Church to exercise their own mission to enlighten the realities and social situations with the Gospel.”