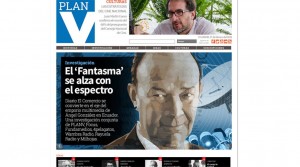 Erika Torres, member of the Regulatory Council of Communication (Cordicom), said that in order to investigate complaints about an alleged concentration of media in the country by foreign businessman Angel Gonzalez, it should be known first if he “really exists, where he really is?”

Torres referred to a digital publication in which it was stated that Gonzalez obtained the frequency for the operation of the new TV station Televicentro “without public tender.”

“We can not rely on what has been said, they are talking about a gentleman who is called The Ghost. Does he really exist, where he really is? This investigation must be serious and must have a technical side,” said the counselor upon leaving a conference