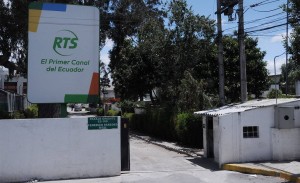 The frequency for the operation of the new TV station Televicentro, which is part of El Comercio group, would have been awarded “without a public tender” by the Agency for Control of Telecommunications (Arcotel), according to an investigation published yesterday by five digital media and two non-governmental organizations. The publication is entitled: “The spectrum is awarded to the ghost.”

Televicentro is on air since last February 2. According to the publication, the procedures for obtaining the frequency began in July 2015.