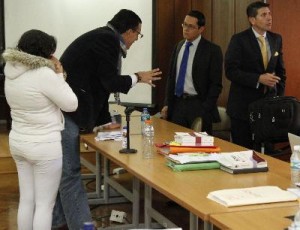 The third day of judgment for the granting, presumably irregular, of the credit of $ 800,000 awarded by Cofiec S.A. to the Argentine Gastón Duzac, continued on March 4 at the National Court. The loan was granted in December 2011.

11 witnesses declared in the process, including one police sergeant, who conducted the expertise of signatures copies of Duzac, however, he could not verify the authenticity of the rubric because he did not have the original.

A computer science expert also declared, convened by the Prosecution, who highlighted she analyzed more than twenty emails of the dialogues related with the delivery of the credit.

The dialogues contain exchanged e-mails and the names of Duzac, the former representative of the Technical Secretariat of the Trust AGD-CFN No More Impunity and former officials of Cofiec. The court is presided by judge Luis Enriquez.