Exploitation of oil in the Arctic 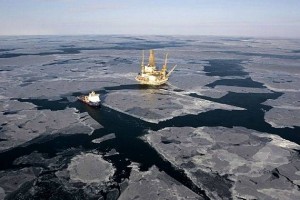 The Department of the Interior of United States approved the exploitation of oil in the Chukchi Sea, off the coast of Alaska, generating controversy against the climate and environmental policy that the U.S. Government has said to promote.

The exploitation of the reserves in the Arctic Ocean has the potential to release an additional 15.8 billion tons of CO2 to the atmosphere, and the rise of global concentrations of CO2 in 7.44 parts per million.

The Shell company already has everything ready to work in the area, although the Chukchi Sea is a difficult and dangerous place to drill. It is estimated that the region contains 20% of the oil and natural gas not yet discovered in the world (23.6 billion barrels of oil and 104,41 trillion cubic feet of gas) and the company expects to begin drilling in mid-year.
According to the own U.S. federal office responsible for assessing the risks of the Shell project, there is a 75% chance of occurring the spilled of more than 1,000 barrels of oil. (I)