Exploitation of Yasuni Correa defends and criticizes the intangible zone 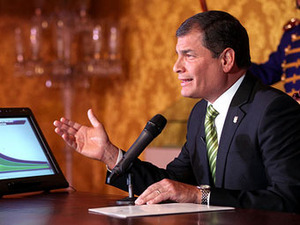 “The primary policy of the Government is to ensure the protection of the towns in voluntary isolation and this is registered in the Constitution that was created in the citizen’s revolution,” said the Ecuadorian President Rafael Correa, in its latest Saturday broadcast. The regime leader justified his decision to exploit the blocks 31 and 43 of the ITT and said “there are no sightings (of uncontacted towns) in the ITT block.”

According to the leader of the country, Ecuador has been the best protector of those towns that have an intangible area of 758 051 hectares (in the parishes of Cononaco and Nueva Rocafuerte, Aguarico canton, province of Orellana and the Curaray parish, canton Pastaza province of Pastaza).

However, Correa did not deny their presence, despite that the last September 16 he questioned the intangible area boundaries.

During an interview in Gamatv, the seized channel by the state, the leader of the regime suggested investigate the backgrounds of “this area is terribly done. A day before taking office in 2007 it appears on the official record the intangible zone modification, 10 km zone, an obscenity for the new government and to go and see if there are technical studies, and there is nothing.”

For Correa, where the blocks 31 and 43 are located, it’s only “supposed that the uncontacted towns are.”