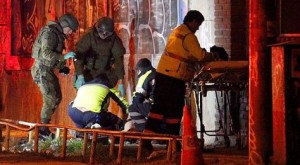 At early hours of today in a downtown neighborhood of Santiago a young man died by the outbreak of a new explosive device.

The deceased was allegedly manipulating a homemade bomb, said the prosecutor of Chile.

“A young man had been handling a homemade explosive device. Under these circumstances it would have exploded, causing him injuries that ultimately caused his death”, Prosecutor Claudio Orellana told the media.

The bomb caused a powerful explosion and according to neighbors, they saw the young man, of about 20 or 25 years old, in flames and still alive, Orellana said.

The Police and medical assistance were transported to the scene where they helped the young man who died while being treated at a medical center.