Exporters demand to improve the custom controls in the Guayaquil Port 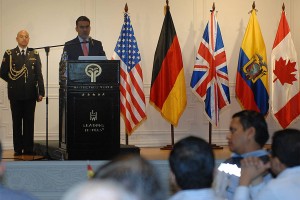 Accelerate the implementation of scanners in the Guayaquil Port in order to avoid another type of custom controls that could reduce the quality of export products, was one of the requests that the export sector made yesterday to the Interior Ministry, José Serrano, in one of the conferences held in “El Oro Verde” Hotel.

The conference was visited by the members of the Binational Chambers from the following nations: United States, Germany, United Kingdom, Canada, Chile, and Spain. The goal of the meeting was to answer any doubt and search better antinarcotic controls when exporting containers.

Bernando Malo, a tropical fruit transporter, manifested that he agrees with the controls, but he thinks that one should not pay for the revision taxes, because those controls, every now and then, damage the merchandise because there is no solid infrastructure in the processes. (I)