The aggregate public debt, which includes all the obligations of the non-financial public sector, reached USD 74.03 billion in June this year. USD 46,455 million correspond to external debt and USD 27,575 million to internal debt.
Between June of last year and the same month of 2022, the total debt registered an increase of 2%. 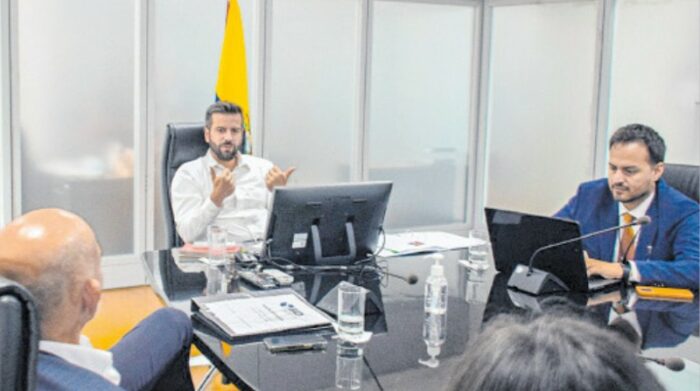 Pablo Arosemena, Minister of Economy and Finance, does not rule out the possibility of going to the multilaterals in search of financing for next year.

When disaggregating the amounts, it is observed that external indebtedness is the one that increased the most. This was due to what was provided by multilaterals, such as the International Monetary Fund (IMF), the Inter-American Development Bank (IDB), among others.

As of June, this year, the debt with these organizations amounts to USD 22,310 million, an increase of USD 3,486 million since the same month last year.

Multilaterals are the country’s main financiers in 2022. So far this year, the State has received USD 2.2 billion from these organizations. The amount is expected to reach USD 4.5 billion by December.

For example, last June, the IMF Board approved the disbursement of USD 1 billion, after reviewing the goals of the program agreed with Ecuador in 2020 and renegotiated a year later. A new disbursement of USD 700 million is planned for December of this year, if the Government reaches other goals.

In this way, Ecuador would successfully complete the program signed with the IMF and should seek new financiers. The Government does not rule out requesting other loans from multilaterals.

Why go into debt?

The Ministry of Finance explained that Ecuador has a deficit budget, that is, the income is not enough to cover the country ‘s expenses. The difference between income and expenses is covered with loans.

Ecuador has had a consecutive fiscal deficit for more than 10 years; 2008 was the last year in which a surplus was recorded. In 2014 and 2020, the worst historical deficits were recorded, above USD 6 billion. This 2022 it is estimated that there will be a deficit close to USD 2.3 billion.

To this amount must be added the resources needed to cover the interest and debts of previous years, with which the financing needs for this 2022 reach USD 10,861, according to the analysis of Jaime Carrera, director of the Political Observatory Fiscal.

These amounts are covered with debt, which can come from multilaterals, banks or other governments, through the issuance of bonds. According to the Ministry of Finance, the debt can be good or bad, depending on the rates and terms with which it is obtained.

At this time, the issuance of bonds for Ecuador is very complicated, since the country risk indicator stood at 1,446 points last Friday. This index soared with the mobilizations of June 2022. Until that date, Ecuador maintained an average of 800 points since April 2021.

This index measures the probability that a nation will or will not pay its debts. The higher the ratio, the more likely it is to default.

If Ecuador issued bonds at this time, it would have to pay an interest rate of over 16%.

For this reason, it is more likely that Ecuador will continue to borrow from international organizations. The rate of multilateral loans is 2.5% on average.

The amount of the aggregate debt, external and internal, reaches USD 74,030 million, this is equivalent to 67.5% of the gross domestic product (GDP) of Ecuador, according to data from the Ministry of Finance.

The Government has two conflicting goals

The Government, on the one hand, has the goal of reducing the fiscal deficit, which stood
at an average of USD 5 billion for eight years and which during the pandemic reached close to USD 7 billion. And on the other hand, they have the desire for economic growth. Which of the two should be given more weight? What the Government has given more emphasis to is the fiscal adjustment, because we are within the program with the International Monetary Fund, which seeks to go from a deficit of 5 points to a surplus of 1 point in four years. Currently there are not many financing options other than multilaterals and that is why not much investment is reflected.

The income of the country is not enough to cover expenses

Ecuador’s economy survives on tax and oil revenues. The former are permanent and the latter variable. The Government cannot plan based on variable income, but must do so based on collection. But tax revenues fail to cover current expenses, most of which are public salaries and wages. The Government, under this rule, has to leverage variable income, such as oil, and take on debt. This year, to lower the fiscal deficit, the strategy has been to reduce capital spending, which is public investment. But for next year (2023), the Government has already expressed the idea of ​​placing bonds abroad again. More debt.

Authorities expect up to 30,000 visitors in Ecuador for the 2022 Copa Libertadores final