Facebook already records spending for presidential ads for the 2021 elections

The virtual is fashionable. The COVID-19 pandemic also altered the way of doing politics. The platforms, the megaphones and the concentrations in the streets will be left aside, at least for now, for the candidates for the 2021 elections who have already turned their preference to social networks – which are not regulated – to promote themselves. 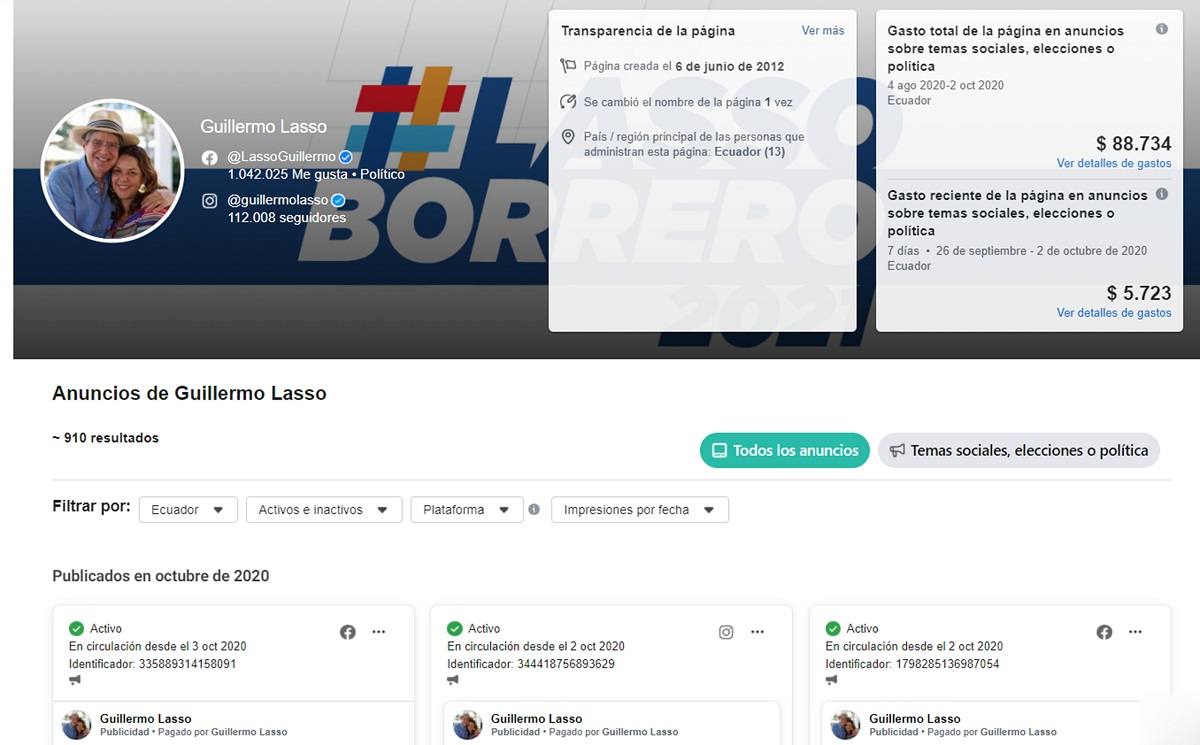 Facebook already records spending for presidential ads for the 2021 elections

The official campaign will begin on December 31, but on social networks such as Facebook, Twitter, among others, an electoral pre-campaign is already evident. In the accounts of some of the candidates and pre-candidates for the Presidency of the Republic there are publications of photos, videos and announcements, as well as their agendas for the day, their tours or meetings promoting their government plan or presenting the new faces of politics.

Since last August 4, Facebook established requirements in several countries -including Ecuador- to circulate electoral and political advertisements. To do this, the advertiser must undergo an authorization process, in addition to placing disclaimers on the ads and entering them in the ad library.

This tool, which is freely accessible to users, allows, for example, to know the spending that some presidential candidates such as Guillermo Lasso (Alliance 21-PSC 6) have already made. In the ad library of your Facebook account, it appears that from August 4 to September 30, you register $ 87,759 ($ 87,160 with disclaimer and $ 599 without disclaimer) for total page spending on ads on social issues, elections or policies.

For the same period, Guillermo Celi, candidate for SUMA, reports $ 1,041 ($ 100 without disclaimer). Gustavo Larrea Cabrera, who is running for the Presidency for Democracy Yes, records an expense of $ 646, while Marcelo Xavier Hervas, presidential candidate for the Democratic Left, reports $ 362.

Lucio Gutiérrez, of the Patriotic Society party, and Gerson Almeida, candidate for the United Ecuadorian movement, do not register ads.

The counselor of the National Electoral Council (CNE) Luis Verdesoto recalls that social networks are not regulated, but adds that the expenses that are detected, even in social networks, can be attributed to electoral spending. “There are expenses in the networks that have a cost and others that have no cost, that is why digital networks are different from the conventional form of communication.”

For Verdesoto, Facebook’s initiative to make spending on political advertising transparent is very good, because in this way it allows the CNE to see what is being done, which is the most consistent form of electoral propaganda in terms of duration, openings and number of applications.

For example, it indicates that this item that is revealed on Facebook can be requested from Google and attributed that expense to what they will receive as electoral dissemination during the campaign, but if they make a pre-campaign expense it can be sanctioned in certain cases that appear in the Law.

According to Verdesoto, that is what they are seeking to include in the regulation of reforms to the Electoral Code, first, that social networks assume the same principle that Ecuadorian regulations have, so that in this way they limit themselves. Second, establish agreements with social networks so that they assume this limitation, this during the campaign.

Regarding the political activity that is already evident in the social networks of some candidates, Verdesoto points out that it must first be taken into consideration that the regulations on electoral propaganda are related to a way of campaigning that does not contemplate the pandemic, thus reducing the face-to-face and the media campaign is expanded, and second, that the time before the campaign is one of the longest and the campaign period one of the shortest, barely 36 days.

He points out that at this time flexibility must be sought because the regulation cannot be applied blindly.

Carlos Aguinaga, former president of the now defunct Supreme Electoral Tribunal, says that what is campaign must be distinguished from what is proselytizing. “Touring the country, publicizing the meetings (…), these things can be done, unfortunately the Democracy Code does not distinguish these institutions from propaganda, from proselytism, it does not adequately distinguish them and since the regulation is generic, certain acts that are legitimate with acts that are not legitimate ”.

He points out that more than the normal proselytism and propaganda that can be done before the campaign, what should be of concern is the “black campaign” or negative that occurs on social networks and that does not have a control.

It expresses that this deteriorates the democratic values ​​and the conditions of electoral participation, directly affecting the common citizen who is disoriented through these malicious campaigns. “It has become a custom (…) to stigmatize candidates, possible candidates, (with) negative acts that undermine the political ethics that one sees on the networks.” (I)

Gerson Almeida and Martha Villafuerte, from the ‘pro-life’ presidential binomial, registered their candidacies in the CNE