450 women have been murdered by their partners since August 2014 when femicide was typified in the Comprehensive Penal Code (COIP) until this January 2021. Until 2014, the deaths of women were treated as murders or homicides , but the inclusion of that The crime came after the shock and debate caused by the crime of Karina del Pozo . 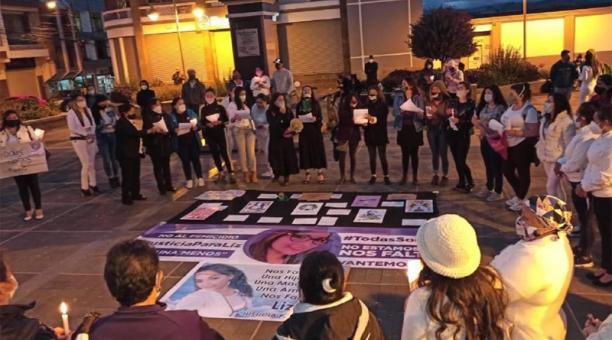 The 19-year-old Quito woman was reported missing in February 2013.

Days later, she was found dead in a vacant lot and with signs of having been raped .

His case became an emblem and a year later femicide was typified as a violent death with characteristics different from homicide.

This crime is configured when between the victim and the aggressor there is a relationship of a couple, work or power. Also, the norm recognizes cruelty in the woman’s body for gender reasons and her death as a consequence of sexist relationships .

Cinthia, Géneris, Jimena, Amanda, Laura, Ángela, María, Ana, Cristina, Lorena … The names of the victims are remembered by their loved ones, who ask for justice and that these events do not mourn more families.

In some cases, relatives have held sit-ins and in others they have developed web pages where they remember what they were like, what their dreams were and why they were murdered .

These are some of their stories:

Relatives of Cinthia Zula held a sit-in outside the National Court to demand justice for the femicide of the 16-year-old teenager. Photo: Eduardo Terán / EL COMERCIO

Cinthia Zula was 16 years old when she disappeared on January 2, 2020. Three days later, her body was found dead in the bushes , near El Teleférico , in the north of Quito . At the Prosecutor’s Office, her case went from being a disappearance to a violent death. The legal medical examination revealed that Cinthia died from a blow to the head and was also a victim of rape .

The relatives began their search for justice from that moment. They collected the first clues . On their own initiative, they collected the images from the security cameras found in the El Teleférico sector .

By August 2020, the Prosecutor’s Office already had a suspect : a 16-year-old teenager , who pleaded guilty and tried to avail himself of the direct procedure.

This is a legal figure that reduces the penalty of those who accept their responsibility .

In the first instance, he was sentenced to seven years of institutional detention .

The young man appealed the decision, despite the fact that the DNA test carried out on the victim’s body identifies the genetic profile of the adolescent, Cinthia’s family maintains.

In the second instance, the appeal was denied, but when the case reached the National Court the judges annulled part of the process.

What happened was that during the quarantine a hearing was held that was not notified and due to that failure the case returned to a preparatory hearing for the trial .

According to Jorge Cancino , a lawyer for the Zula family, this means that the sentence was annulled and that the case must be tried again.

The victim’s mother points to the lack of diligence on the part of the Prosecutor’s Office . She hopes that the suspect in her daughter’s crime will serve his sentence and that the authorities will not allow him to escape or leave the case in impunity.

Lizeth Riofrío’s family hopes that the justice will sentence the person responsible for her death with the maximum penalty. Photo: Courtesy

The 31-year-old family of Lizeth Riofrío  still remembers her big green eyes , the curiosity with which she examined everything and the dreams of a better future for her two children.

She was studying law and wanted her children to become policemen . On August 6, 2020, everything was cut short. She was stabbed 35 times by her ex-partner.

That day, Lizeth left her home, in the south of Tulcán , in Carchi , and met the father of her children . They already had months apart, indicated a close friend, but the relationship was one of “comings and goings.”

That day, the young woman went with her ex-partner to the Las Palmas motel, on the outskirts of Tulcán.

The surveillance cameras recorded the moment they arrived in the car driven by him. Two hours after entering the room, a friend of the ex-partner received a text message: ” Call my aunt Fanny and tell her to come to the motel , because it seems I killed Lizeth.”

Three hours later, the police entered the room and found the body of the young woman lifeless and next to him his ex-partner.

He had cuts on his neck and chest , because he had attempted suicide. He lost blood, but was stabilized at the Luis Gabriel Dávila hospital in Tulcán.

Sibson Pozo, defender of the Riofrío family, says that the investigations in the Prosecutor’s Office have advanced and that with all the evidence they hope that justice will impose the maximum penalty against the aggressor.

Angela was 18 years old; his plans were truncated

Ángela Osorio was murdered by her boyfriend of 21 years. His sister asks that the investigation of this case be transparent. Photo: Courtesy

Ángela Osorio was 18 years old and wanted to be a stewardess . Her dreams were to travel, learn English, earn money and help her four younger siblings, with whom she had grown up in a family home.

The young woman was Colombian. She arrived in Ecuador after fleeing the violence and was welcomed by different foundations, until the State withdrew her mother’s guardianship . At the age of 13, she entered a foster home .

There she met the person who killed her. The incident happened on November 29, 2020. That day her boyfriend suffocated her with a pillow after having an argument.

According to police information, the 21-year-old man reacted violently when the young woman told him that she was no longer a virgin.

Sarahí , Angela’s sister, says that this crime could have been prevented. He says that months before he had warned the foundation run by his sister about his relationship with the young man.

He says that his sister was in a situation of double vulnerability .

First, because the young woman belonged to an institutional foster care program and second, because her boyfriend beat her .

“She didn’t want to tell me at first, but I told her to trust me, that I was her older sister.” Sarahí says after knowing the details of the relationship, she went to the family home , but was not listened to.

“I warned the authorities of the center, on more than 10 occasions, about my sister’s problems and her relationship, because she was supposed to be in the care of that institution, but they never paid attention to me.”

Sarahí says that a few months before her death, Angela asked her what a companion was . “I told her what it was about and she told me that her boyfriend wanted to take her to the coast to do sex work .”

He says this also warned the foundation authorities.

His sister asks that the investigation be transparent . In addition, they request more protection for Angela’s four younger siblings, who are also under the care of the State.