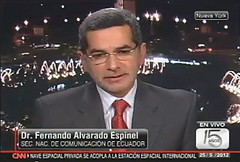 Invited by Fernando del Rincón to the TV show ‘Conclusiones’ of CNN in Spanish, to discuss the closing of daily Hoy, the Communications Secretary Fernando Alvarado admitted the evening of September 1 that Editogran losses, print provider of daily El Telégrafo, are of $ 17 million.

Alvarado mentioned this amount after commenting with Del Rincón that the closure of the Quito newspaper (Hoy) was due to the losses that recorded its circulation, which exceeded the capital.

However, Alvarado corrected him and said that the losses are $ 17 million and not the nearly $ 28 million that scored the interviewer (counted since 2007).

He also added that  El Telégrafo “is a daily that possesses a huge print provider, which edits the school supplies of all students and it has a turnover of about 50 million (…). It has made major investments and has indebted to the National Finance Corporation (…). It will reach an equilibrium point and will generate utility, “he concluded.