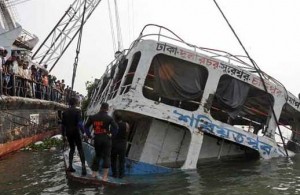 A ferry sank in a storm this Thursday on a river of central Bangladesh, leaving at least twelve people dead and hundreds missing, authorities announced.

The wreck took place shortly before the 15:00 local time (0900 GMT) during a storm on the Meghna river in Munshiganj district, about 50 km south of Dhaka, the capital according to official sources.

“There are contradictory figures on the number of passengers on board when it sank, but could be between 200 and 350,” said an official of the district Munshiganj, Saiful Hasan.

So far there have been 12 deaths among women and children are included, said the head of the local police, Ferdus Ahmed. “The ferry sank completely. Now we are trying to track it, “added the police official.

Patiño will receive to Jacobson to prepare John Kerry’s visit