Fishing for giant squid, in international waters between the coast of Ecuador and the Galapagos, reduces food for sharks

A whale, a giant squid, sharks, shoals of tuna, birds and sea turtles have in common that they live under the sea in the same ecosystem. But everything goes further. Each one is an important link in a great biological puzzle. If one disappears abruptly due to overfishing, it alters the ecological balance and forces species to change their habits, to evolve in order to survive. 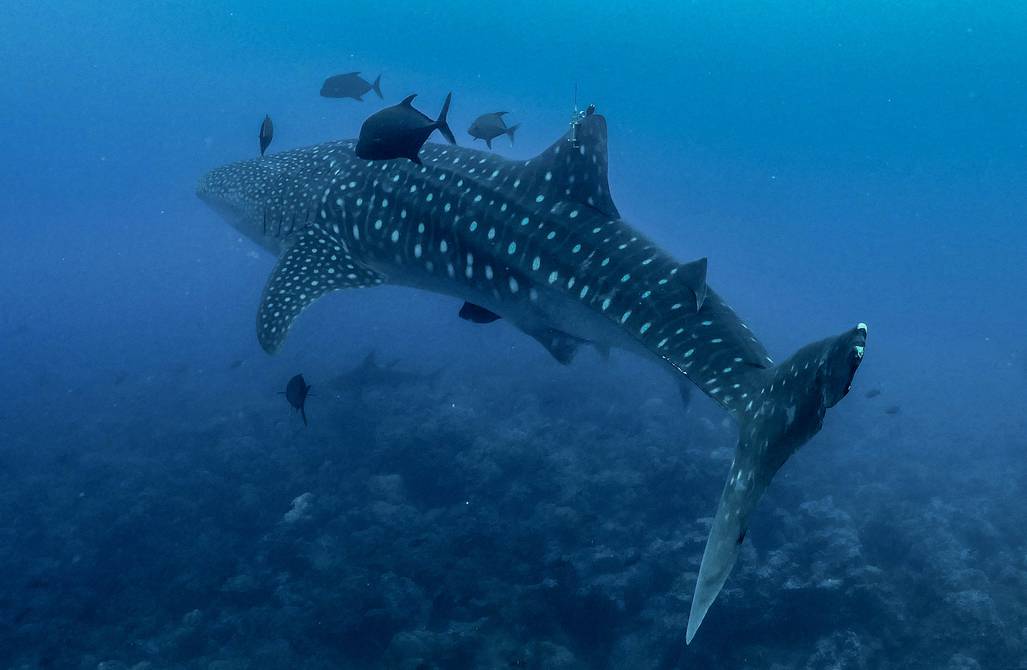 The whale shark, which has fauna associated with it, makes migrations in which it runs into overfishing activities.

The impact is uncertain but scientists have their guesses about the arrival of the foreign fleet that captures the giant squid en masse. There are about 300 ships, most of Chinese origin, which are located between the Insular and Continental Exclusive Economic Zones (EEZ) of Ecuador, in a 200-mile strip of international waters that is between the coast of South America and that of the Galapagos archipelago.

A pressure that is added to that exerted by national boats and other nationalities.

The endemic and migratory species of these islands, which represent the most important tourist postcard of Ecuador, are in danger.

The sperm whale, being a toothed whale, eats the giant squid, a target species of the Chinese flotilla that reaches sexual maturity at three months and does not live beyond two years. The tuna also feeds on squid, which would enter the country’s EEZ in less quantity as it is caught in international waters.

Everything is related. “Whale feces have been proven to be incredible food for phytoplankton and zooplankton (plant microorganisms that are the base of the food pyramid of marine ecosystems). If squid are affected by the fishery, then there is an imbalance”, says Arturo Izurieta, former director of the Charles Darwin Research Station.

The specialist indicates that the catches of tuna in the country’s EEZs may be affected in the future if the claims and controls of squid fishing are not carried out to keep these fishing resources in good condition.

The problem, says Alex Hearn, a biology professor at the San Francisco de Quito University (USFQ), is that there is not enough data to know if the squid catch is a sustainable fishery or not. “The intensity focused on the borders of our waters in such a short time (between July and October) can lead to a population decline of squid, which is the basis of food in the marine ecosystem, which can have an effect on behavior, in energy expenditure and movement of other species, including sharks”.

A study conducted a year and a half ago in Florida, in the United States, analyzed reef species with and without sharks. There it was determined that the species are less fat and with larger eyes when there are the dreaded predators and in those that are not, since the rest of the species develop smaller eyes and are more obese.

Its influence can also generate changes in the physiognomy of the ecosystem. Certain animals, such as sea turtles, avoid some areas because they are home to these predators so they no longer leave their impact in the area and the algae grow more. And these serve as a breeding area for other species. “It is a landscape, a scary panorama, it is a very interesting role for the sharks,” says Hearn.

The latter happened on the island of Cocos, in Costa Rica, with the arrival of the tiger shark.

Added to this threat is that of the other boats that catch sharks in international waters to the west of Galapagos and on the whale shark routes, which depart from the Ecuadorian and Peruvian coasts to the southwest of Galapagos in January and February. It stays in Isabela, where apparently there is a feeding area, and from there it advances until June towards Darwin, to the north of the archipelago, and travels 1,500 kilometers to the west of what is called the equatorial front and turns around to return. to the point where the journey started, Hearn adds.

“Like the squid fleet, the one that catches sharks has the ability to stay at sea for months because they have collection boats and are subsidized by governments, so that lowers costs and encourages overfishing,” he says.

The hammerhead shark migration route includes, on the other hand, crossings between Galapagos, the coast of continental Ecuador and the Cocos Islands, which encompasses strips of international waters.

“The females arrive on the continent, spawn or calve in mangrove areas on the Ecuadorian coast and return to the Galapagos, where they also do so. They are dynamic and play a role in regulating the populations on which they feed”, says Izurieta.

One of its functions is to eat the weakest tunas or fish and leave the most robust ones to be caught by the country’s fishing industry, he says. In other words, they are a tool of natural selection. “Sharks are at the top of the food chain and are regulators of populations of the species on which they feed.”

Stingrays are others affected. They get caught up in fishing gear and play a key role in zooplankton regulation.

The 300 boats that come to fish between the coast of Ecuador and the Galapagos form an area almost equal to the extension of the Guayas province. “It took an airplane pilot more than four minutes to cross this mass of boats that they shine at night with which they attract squid and other species. As there is no fishing declaration in terms of volume and species because it is transferred to other vessels, including processors, it is difficult to see the effect on the country’s EEZs and on the Galapagos marine reserve contained in it,” says Izurieta.

It is not necessary for the international fleet, which catches squid and sharks, to go fishing in the country’s EEZs, since marine species such as sharks and tunas have routes that go beyond the borders established by the countries.

And there are possibilities of them entering since these ships usually turn off their locators when they are within a territorial sea that is so vast, 200 miles from the coast. Or the longline, a long line with thousands of hooks, can reach the EEZs under the sea, says Hearn, with the boat parked outside this space: “This is very difficult to detect. The Galapagos National Park reported more than 130 fishing vessels within the Galapagos Marine Reserve (a protected marine area that spans 40 miles from the archipelago’s coasts including inland waters) in the last two years in an unauthorized manner. Not all of them were fishing but they didn’t have to be there”.

In addition to the critically endangered albatross, the blue-footed booby population has been depleted in Galapagos. Initial studies indicate that the decrease responds to the capture of anchovies and other species that has been done en masse for decades.

As sharks hunt, schools of fish rise as high as possible to the surface to escape. They are like a huge ball of small fish that are between the surface and the predators that are below. So this allows the seabirds to feed. It’s a non-voluntary, non-deliberate collaboration, Hearn says.

Gustavo Redín, president of the Ecuadorian Coordinator of Organizations for the Defense of Nature and the Environment (Cedenma), presented a claim to the Ministry of Foreign Affairs on Monday, July 5, to carry out actions in order to stop the damage. due to the indiscriminate, systematic and illegal fishing carried out by the foreign fleet in the area adjacent to the country’s EEZs. (I)