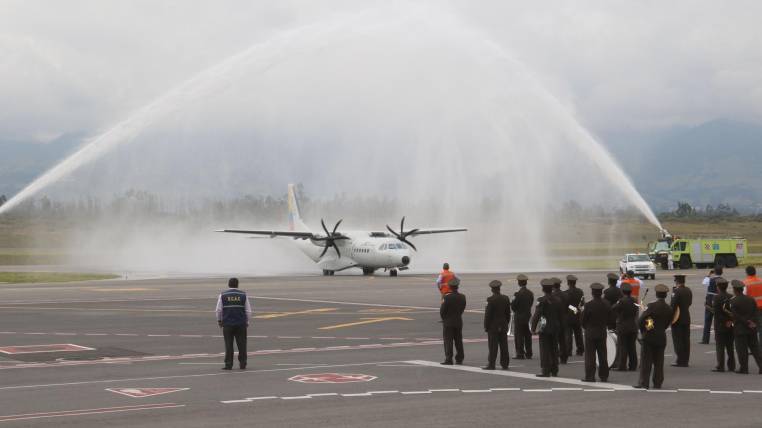 The bodies of Efraín Segarra, Paúl Rivas and Javier Ortega arrived in Quito under a fine drizzle. A twin-engine fighter from the Air Force brought them from Cali, where their forensic identification was practiced. There was a police band, two tank cars that fired a monumental arc of water and a hundred vehicles in a caravan to the necropolis of Memorial, in the north of the capital. A group of family and friends was there to receive them. And senior representatives of three ministries. The chancellor, José Valencia; the Minister of the Interior, Mauro Toscanini; and the Deputy Minister of Justice, Liliana Guzmán, expressed their official condolences and were lost aboard their vehicles without license plates.

Gray day in Quito. At Tababela’s airstrip, a dry blow of a bass drum cuts off the breath and the band of the police play a very sad funeral march. From the open hatch of the plane, the coffins come out one by one, wrapped in plastic, covered by the flag, carried by groups of six policemen at a slow pace. Below the plastics, the three names are hand-written. The drizzle is released at the precise moment when the first coffin descends to the ground and does not stop until the last of them has completed its 50-meter journey to the group of funeral vehicles waiting on the track, crowned with large bouquets of White roses. Mourners also cry, shout names, and exchange deep hugs.

Before, there was friction in the waiting room of the airport, where dozens of journalists with a lump in their throats crowded to fulfill an ungrateful task. The known faces of the demonstrations against Carondelet arrived, those who accompanied the whole process and nothing had prepared them for this coverage. An inopportune television embedded in the wall dispatches the Mexico-Sweden and it is scarcely possible to imagine a World Cup match more unattended than this one. Here, tears come easily. And the hugs. But he does not get along with mourning protocol. There were those who tried to organize the relatives in three different queues; who tried to deny the journalists access; there was a police presence beyond the measure.

After the sad ceremony, in another room of the airport whose walls were ceded by the revolution to his painter Bolivars and Manuelas, Pavel Egüez, the ministers speak. The one of External Relations is limited to express its solidarity to the relatives. Interior assures that the gang of Guacho, the murderer, is surrounded by Colombian forces. And the Deputy Minister of Justice informs that, from now on, their portfolio will take charge of the case: “we take it back,” he says, “the inter-institutional coordination that the case merits and in the last 90 days we have been carrying out.” Confused, like everything in the handling of this crisis.

The caravan leaves for the necropolis. The line of those waiting outside is long. They have one hour of travel ahead. On the way, people stop with respect and say hello. At the entrance to Pifo, the children of a school have left with a large flag to watch the procession pass by.

In the cemetery, three viewing rooms await these victims of terrorism. Next to the entrance door, the mourners have improvised a funeral monument with a large sign bearing the three emblematic faces, a carpet of white flower petals, three bouquets of roses and a score of lighted candles. Office papers written with testimonies of love and strength have been sticking on the poster, almost to cover it. They are the messages of journalists.

This was the return of Efraín Segarra, Paúl Rivas and Javier Ortega to their country: short, silent and sad.

The detention of Guacho “is close”

Ecuador and Colombia maintain the pressure on Walter Arizala, alias Guacho, accused as the author of several attacks in the northern zone of the country, including the kidnapping and murder of El Comercio journalists.

Interior Minister Mauro Toscanini said the narco-terrorist is “soon to be located.” At least, that is the information that the official has received from the Minister of Defense of Colombia, Luis Carlos Villegas.

The Ecuadorian acknowledged that there are multiple versions of the situation of the leader of the Oliver Sinisterra Front. “Some say it is hidden, that it is wounded, they locate it on the one hand, on the other,” he said ironically. What does seem certain is that it remains in Colombian territory.

Currently, there are 52 detainees in Ecuador and 30 in Colombia related to the Guacho gang. (I)

Bureaucrats, as expensive as all doctors