Five political parties seeking the Presidency of Ecuador in 2017 elections 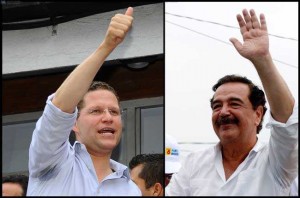 Rodas and Nebot, Leaders of the SUMA and PSC parties

Alianza País (AP) , Avanza, PSC, CREO and SUMA have plotted as a goal to capture the Presidency of the Republic , one of the authorities to be selected within three years , motivated by the partial results of February 23 .

The ruling party is the first political force in the country. The second, according to Correa, is Avanza, led by the Minister of Industry, Ramiro Gonzalez, who has been declared ally of the government, but within the organization he is considered as ” priority one ” to be presidential .

The CREO movement also has its priority. The territorial coordinator Lorenzo Calvas says the candidate will be Guillermo Lasso (former banker).

Instead, the PSC and SUMA parties have to look at other options because their main cards have declined to run for the position.

The head of the PSC, Alfredo Serrano, stresses that “the logical candidate for President, party and Trend”, is the mayor of Guayaquil, Jaime Nebot, but his refusal will force to shuffle alternatives.