Verónica Artola, manager of the BC, explained that the Venezuelan investment is mainly for oil services, in addition to mining and quarrying. For the former Vice Minister of Foreign Trade, José Xavier Orellana, the increase of 21.3% in FDI in the first quarter of 2018 is positive, with respect to the same period of 2017.

However, he considers that it is still a very small amount. “If we consider an equal investment during the other three quarters that remain in the year, we are talking about $ 884 million, that is less than 1% of Gross Domestic Product,” said the economic analyst.

Orellana said that the State should aim to triple that investment. He recalled that the country has opposite oil wheels, tenders for smaller fields were opened, for Suroriente fields, as well as mining projects, which could increase investment with important figures.

Despite this, he said that the country should also target other sectors such as aquaculture and tourism. According to the central bank, in the evolution of foreign investment during the first quarter highlights the increase in reinvested earnings that reach $ 63.9 million. 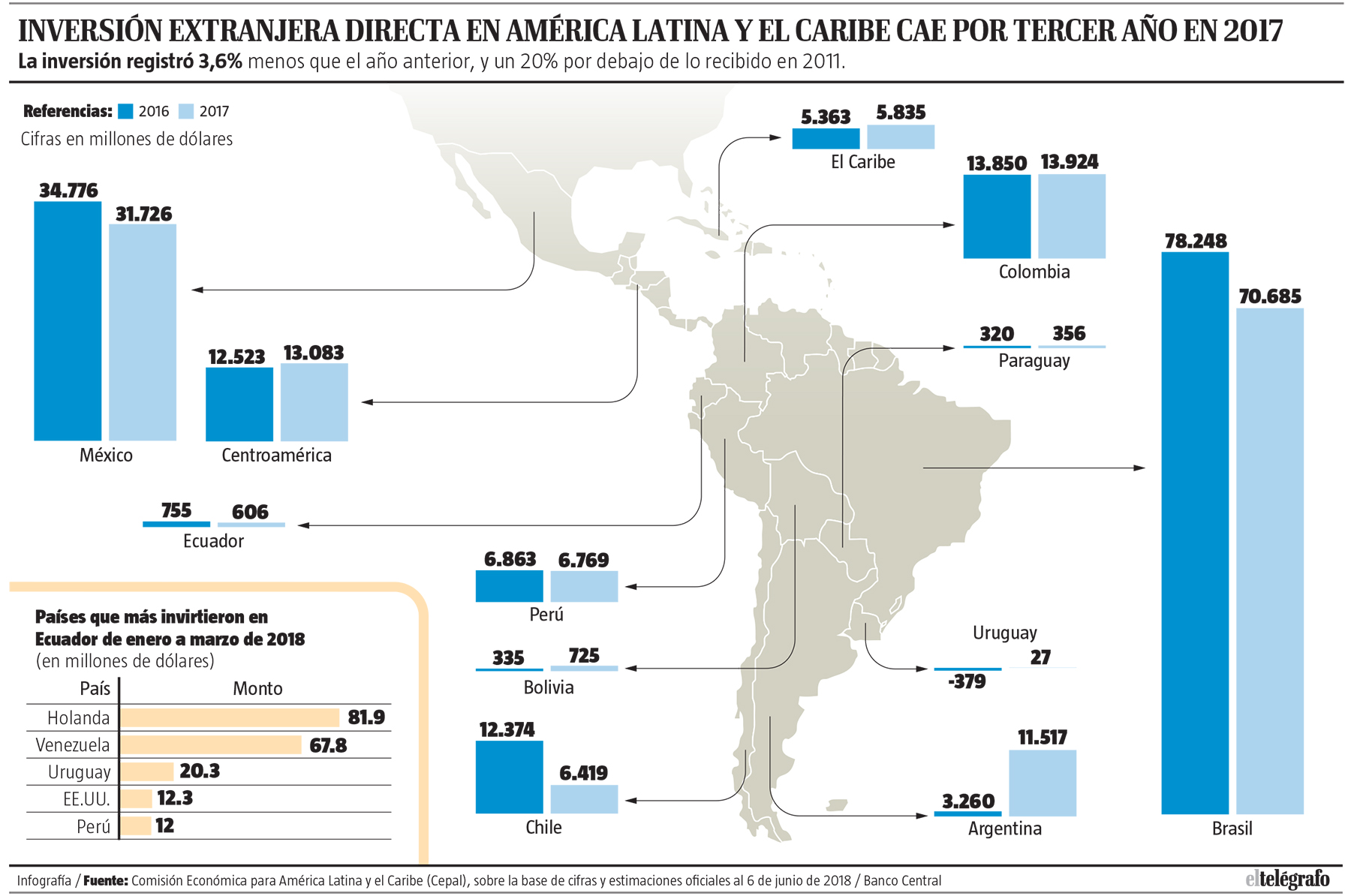 Pabel Muñoz, former Secretary of Planning and current president of the Economic Regime Commission, stressed that investment generates employment and productivity, however we must look carefully if these foreign resources are indeed beneficial for the country. “In a dollarized economy, if a company invests $ 100 million, and after three years takes $ 300 million out of the country due to the reversal of its profits, we must ask ourselves if it is really beneficial,” Muñoz warned.

He also said that the best equation to attract private investment is an adequate public investment, through the development of roads, ports, airports, something that was reflected in the previous decade.

In view of this, he stressed that the current regime does not have a clear development perspective that allows attracting investment that is necessary and beneficial. According to the report Foreign Direct Investment (FDI) in Latin America and the Caribbean 2018, released by the Economic Commission for Latin America and the Caribbean (ECLAC), in 2017 Ecuador saw FDI inflows fall by 20%, to $ 606 million, a similar figure to the one that entered the country between 2011 and 2014.

This fall originates mainly in the extractive sector, which in the previous two years received around $ 500 million annually, but only reached $ 64 million in 2017. Ecuador’s extractive sector is dominated by oil production, in which several transnationals operate in partnership with the State Petroleum Enterprise of Ecuador (Petroecuador).

On the other hand, there are mining megaprojects, which are not yet in the production phase and with which the country estimates around $ 1 billion of investment. Foreign investment fell in Latin America The ECLAC report released on Thursday, July 5 in Mexico City, indicates that investment in the region fell for the third consecutive year in 2017 and remained at $ 161,673 million, a 3, 6% less than the previous year, and 20% below what was received in 2011.

According to the agency, the continued decline in FDI since 2011 can be explained by the lower prices of export commodities, which have significantly reduced investments in extractive industries.

The document also points to the economic recession that occurred in 2015 and 2016, mainly in Brazil. These two trends, however, were partially reversed in 2017 when the region resumed growth (1.3% of GDP) and oil and metal prices rose. While in 2016 the vast majority of countries in the region registered declines in FDI inflows, in 2017 they rose in most of them.

The main source of investment for South America was the European Union, while in Mexico and Central America, the resources were deposited by the United States. ECLAC emphasizes that investors now look favorably on renewable energy, telecommunications and automobile businesses, although not so much as to recover the levels of external contributions received in previous years and produce, in the medium term, a transformation in the productive profile region

The director of Cepal, Alicia Bárcena, asked to focus on the future in quality and not so much in the amount of new investments. “We no longer need any type of FDI to come. It is important that they are good investments, that they create employment and that they incorporate MSMEs, “said the official. (I)