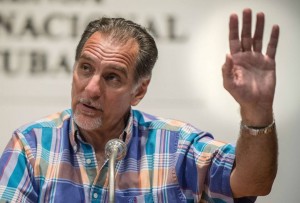 The Cuban René González, liberated since three years after serving a sentence for espionage in the United States, accepted an invitation from President Rafael Correa to visit Ecuador, according to a statement released on Wednesday December 24 in Quito.

“It is impossible to refuse an invitation of Correa. President Correa has been one of the strongholds of the struggle for freedom of the five” Cubans who completed extensive imprisonment in the United States, González said to the Ecuadorian public channel ECTV.

Correa described as “beautifully amazing” the restoration of diplomatic relations between Washington and Havana, which included the release of three Cubans who were among five officers arrested in 1998 and convicted in US for spying on anti-Castro groups in Miami.