Former diplomats say that note addressed to the Vatican “remains there” 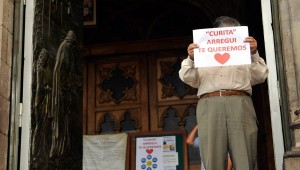 The former ambassador of Ecuador to the Holy See, Marcelo Fernandez, and the former ambassador to London, Mauricio Gandara, agreed that the government has to withdraw the protest note sent to the Apostolic Nunciature, the Vatican seat in the country, by some statments made by Archbishop Antonio Arregui.

And the Vatican is not obliged to answer, especially when the parties have overcome the impasse.

Fernandez said that this is the “diplomatic practice.” He said that the country receiving the note, in this case the State of Vatican City, “has the authority” to answer it or not.

Mauricio Gandara added that the State of Ecuador should not withdraw the document.

“It has been overcome because the Government of Ecuador has not insisted, and also because of the disallowance made by the Chancellor commissioned to the insolent statement,” Gandara said.