BREAKING NEWS
Renegotiation started with payment of 2020 Bonds
Coronavirus pandemic prompted virtual training of farmers
Venezuelans in Ecuador can apply for a humanitarian visa until August 13
Ecuadorian companies see benefits for renegotiation of external debt
Rafael Correa may not be a national candidate
Alvaro Noboa’s son defends his father from “memes” and ridicule on the Internet
Agreement with holders will bring five benefits
Ecuador negotiates to pay debt until 2040 with lower interest
The vacancy of office spaces increases and rental prices tend to drop in Guayaquil
Galapagos: the jewel in the crown does not feed 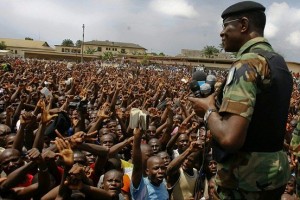 Ivory Coast president, Laurent Gbagbo is sheltering with his family in the basement bunker of his home in Abidjan. Gbagbo’s Foreign Minister, Alcide Djedje indicated that a ceasefire has been ordered, but Ouattara supporting forces have not confirmed this.

The United Nations confirmed that many of Gbagbo officials are abandoning him. The stubborn president refuses to leave his charge even after the Ivorian election commission declared him the loser of November’s of run-off vote, and the UN certified the result. Recently the French Foreign Minister, Alain Jupper, informed that Gbagbo’s is in negotiations over his departure.

Meanwhile Gbagbo’s army chief, Gen. Jean Philippe Mangou informed AFP that his troops have stopped the shooting. Mangou had deserted last week, but returned after Djedje told the BBC the “war is over.” While giving this statement the shooting could be heard in the background. Patrick Achi, spokesman of president Ouattara informed that if Gbagbo is captured, he would be arrested and brought to justice.

Last week the forces loyal to Ouattara, a former International Monetary Fund economist, began a drastic military offensive that swept the city from north to west. Many civilians remain prisoners in their homes. Food, water and electricity are scarce in the city of almost four million people.

Renegotiation started with payment of 2020 Bonds