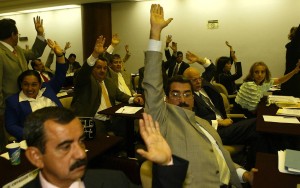 A group of former deputies who were identified by the current National Assembly as a ruling majority and who were responsible for the removal of judges of the former Supreme Court (CSJ for its Spanish acronym) and members of the defunct Constitutional Court (TC) in 2004, try to prepare a joint legal defense.

The dismissed judges filed lawsuits before the Inter-American System of Human Rights, which ordered the Ecuadorian State, in 2013, to pay a millionaire compensation for affecting their rights.

“Affiliate with the heart,” a campaign for the registration of Alvaro Noboa´s party