Forum on freedom of expression takes place in Quito 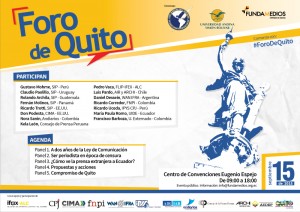 Today a forum for freedom of expression with media professionals that seeks to elucidate on the subject and the situation in the country will be held.

The experts were invited by the Inter American Press Association (IAPA), the Andean University Simon Bolivar and the Andean Foundation for the Observation and Study of the Media (Fundamedios).

The signing of the Declaration of Chapultepec by Mayor Mauricio Rodas and Gustavo Mohme, Peru IAPA President, will be the first activity of the forum.

At the conference there will be five panels with journalists and exhibitors who will reflect on the two years of implementation of the Communications Law, journalism in times of censorship and how the foreign press sees Ecuador.

It is expected the attendance of Ricardo Trotti, president of the Interamerican Society; Ricardo Corridor, of the New Iberoamerican Journalism Foundation (FNPI for its Spanish acronym); and Ricardo Uceda, of the Committee for the Protection of Journalists (CPJ) and director of the Institute for Press and Society (IPYS) of Peru.