Four bodies are recovered from ferry burnt down in Greek coast 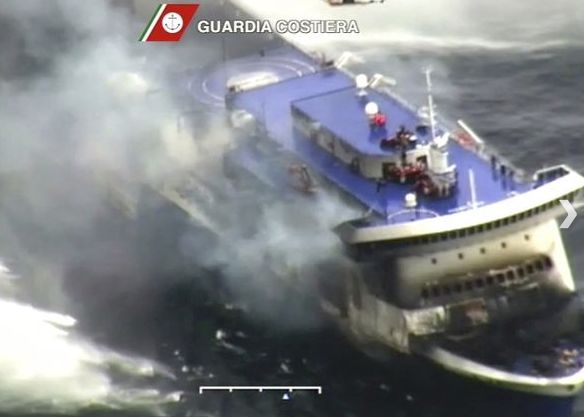 The Greek Minister of the Sea, Miltiadis Varvitsiotis, announced on Monday that four more bodies were recovered during the salvage operation of hundreds of passengers who were on the burnt ferry Norman Atlantic, raising the death toll to five.

“The Italian authorities confirmed that four bodies, whose identities are not known, were recovered,” the Minister told the media.

A huge rescue operation to evacuate the occupants of the ferry “Norman Atlantic” was held this Monday.

So far “there 391 survivors” of the 478 passengers and crew that were aboard the ferry, where a fire broke out on Sunday, said the official.

Yesterday, a dead Greek passenger was pulled from the water along with his his wife, and were taken by helicopter to Brindisi, as well as several other people who were suffering from dehydration and hypothermia, authorities said on Sunday.

On early Sunday morning a fire broke out in the garage of this ferry, which had left the Greek port of Patras, in southwestern Greece, bound for Ancona.