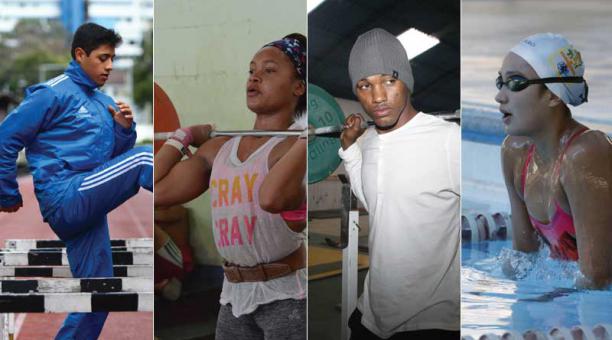 His preseason began to perform solo. On Saturday, January 13, 2018, he traveled to Rio Verde to train with the National Team. Carlos Mina, bronze medalist at the World Cup in Germany, trains for the Odesur Games in May.

“This year we will participate in the second tournament of the Olympic cycle and we have a commitment to the country,” said the 25-year-old, born in Guayaquil, but lives in Quito. “I train in the gym of Carcelén and its streets. From 08:00, I go running and I go up and down. I love the neighborhood. “In this part of the year he does physical work, but without ceasing to perfect the technique.”The one cannot live without the other. If you choose only one, you’re half a boxer. “After the athletic career begins to complete circuits with strength, resistance and technique exercises. “I do 15 repetitions in each season and complete three courses per training session.” First goes to cuchimbolo, stays there about 15 minutes sending direct hits and hook. To gain strength in his arms, he performs 50 repetitions of the known push-ups. Then he goes to the bench and leans up the bar 15 times.

For the work of shoulders and legs, place the bar on your shoulders, and perform 15 squats. The rope for 10 minutes and closes the circuit with a series of 50 crunches.

Once the physical part is completed, it is placed back in the gloves to do shadow work. “The rival is myself. In front of the mirror I can look at my technique, the defects, the movements of defense and attack. “All this work is done in the morning and repeated in the afternoon.

The tables are sent from the national team or “I do them, according to my experience”. On Saturday he traveled to the High Performance Center in Rio Verde, where he will meet his official calendar of events for 2018. “It may be that in February we will travel to Hungary, to make a camp,” said Carlos Mina, who trained under the gaze of a score of children and young people.

From four to five hours of training to the full day Samatha Arévalo, the world swimming vice champion in Open Water. She is in Ecuador because she must manage her visa to stay in Italy, where she resides since 2017.

She trains with Fabrizio Antonelli and the National Team of that country. “Our preseason started on December 10th, we just stopped training on January 1st.” He has trained in Quito, Macas and Cuenca. The training tables are true to the letter. “I’m in a stage of adaptation with the coach, with whom I work since July.”

Her training begins with exercises where they are set in motion, mainly the joints: elbows, knees, fingers and hips. After 20 minutes of warm-up, he enters the pool for two hours, “in December we were swimming 5 kilometers per session, now we are at 8 and we are going to finish at 10.

We are adding kilometers”. On Mondays and Fridays she does 40-minute sessions in the gym with his own weight, while on Wednesdays he places additional weight. The intense workouts, in the morning and in the afternoon, force her to take a break for recovery. She sleeps one hour, at noon to continue with her work.

To compensate for physical exhaustion, eat carbohydrates. “I love bread at breakfast,” she says with a smile that she knew was justified. She ingests rice and pasta, and “the tropical fruits that are in the country. I took the time of mangoes and I ate papaya.” Samantha, 23, and born in Macas, will participate in the seven valid World Open Water Circuits.

She is a specialist in the 10 kilometers. “In March the circuit in Doha will begin. Last year we completed the seven valid ones, for the first time, it served as learning “. The goal of her and her coach is to complete the circuit this year and also the next one.

In May she will be in the Odesur Games where he will compete in Open Waters. She still does not know if he will participate in pool events, as he did in the Bolivarians, where she won two gold medals in 5 km and 10 km.

Neisi Dajomes will bid farewell to the juvenile division in the Disciplined World Cup, mature and demanding, thus defines Mayra Hoyos to Neisi Dajomes, the great talent of the Ecuadorian sport that is formed in Shell, Pastaza.

The weightlifter, 19 years old, was the best sportswoman of 2017 for her gold and silver medals in world competitions. This year he will bid farewell to the youth category in the World Cup. He will also participate in the Pan-American and the Odesur, where he will have rivals of the adult category. “We started our sports year on January 3 with the general preparation, where physical work is very strong, to face the season,” Hoyos adds.

Neisi and Mayra prefer to train in their parish, Shell, where they are from. But in April they could go to Madrid, where they received an invitation to do a two-month camp. “There she trains the Spanish Lidia Valentín, current world champion. I’m interested in looking at their way of working, which is foguee competing against it, “adds the coach. But the economic contribution given by the Ministry of Sport will only begin to be delivered in March, and they must be in Europe that month. “In Spain they offer us lodging and food. We must finance the tickets and money for additional expenses like vitamins. ”

While they wait for the audience of the Sports Minister, they continue with the training. These days, they work double shift on Mondays, Wednesdays and Fridays, while on Tuesdays, Thursdays and Saturdays they do it only in the morning. “The goal is to strengthen all the muscles, and we work specifically on the arms, legs and back.” Hoyos designs, in each training, a circuit with five types of exercises, where he performs six repetitions.

The circuit goes through it five times. “Neisi is a very disciplined athlete. Almost never fails training and meets 99.9% of the plan. Outside the gym, she is a cheerful young woman, joker, she never stops laughing, “explained Mayra Hoyos, who has known her for 12 years.

On the slopes of Cotopaxi and Chimborazo, at 4,400 meters high, he made his general preparation David Hurtado, youth marcher who led the world ranking of the 10 km march. “We went six times to Cotopaxi and four to Chimborazo. There were some walks there because we need to accumulate red blood cells, “said Javier Cayambe, TD of the walk, 19 years.

This year, David has two high-level challenges: the China World Cup and the U-20 World Cup in Finland, in May and July, respectively. This plan seeks to improve their strength and endurance, and strengthen their body structure. “We do swim sessions, twice a week, swims between 800 and 1,500 meters and works of strength and resistance in the water “.

The training began in November, continued in December and this month began the specific work. “At this stage we have to compete, because we have local and national tournaments.”

In fact, yesterday, David Hurtado participated in the Pichincha selection, because in two weeks there will be the national championship of march in Sucúa. In that Amazonian city the South American will also be developed, where the marcher aspires to achieve the gold medal, since he is the first in the ranks.

In March and April, Javier Cayambe has a training base in Spain in his plan. In addition to working on the physical and technical part, in this phase we will try to give you a rhythm of competence.

“In April there will be a walk in Portugal of the World Tour. Then we will try to go to La Coruña before the World Cup in Finland. “In the specific preparation, emphasis is placed on the body movements required by the march, such as the swing of arms, hip movements and the walking stride.

“We have to achieve a rhythm of competition in which the speed does not cause flaws in the technique.” In that period, which will doubt eight weeks, nothing can escape.

There they will measure pulsations before and after practice, weight and analyze how the muscle is in the work zones. (I)