The French President, Nicolas Sarkozy put into practice this Monday the new measures against crime and illegal immigration. Subject announced last July on a new reform that included an immigration law that would facilitate the expulsion of the undocumented. 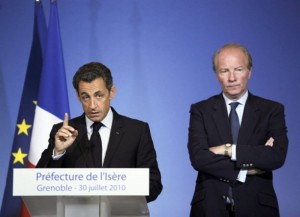 The new measure allows the possibility of withdrawing the French nationality of people with immigrant origin, whose actions jeopardize the lives of any country officials like the police. Sarkozy also proposed that polygamy be a motive for revoking citizenship but this won’t be happening.

This was revealed by the Eliseo after a meeting between Sarkozy, the Prime Minister, François Fillon, and the Immigration Minister, Brice Hortefeux regarding the issues of security and immigration. Sarkozy reaffirmed his will to apply all measures announced on July 30 in Grenoble, and is very determined to see this matter approved.

On his speech in Grenoble, a city that was the scene of riot following the death of robber shot down by the police, gypsies were also involved in the robbery.Sarkozy also said that he plans to eliminate all of the gypsies’ illegal camps and expel them of the country in no less than three months.

The President wants to reform a law of immigration so that the expelling of irregular immigrants and under some circumstances citizens of the European Union. This expelling will be exercised by any threat against public order, permanent absence of means of subsistence and the abuse of the right of free movement, explains the document.

The retrieval of the French nationality is to all immigrants who attempt to harm the life of any person that belongs to a public authority, especially police officers. This law will be applied after ten years of obtaining the nationality.

One of the priorities of Sarkozy’s priority is to establish a prison sentence of 30 years without the possibility of reducing it.  This measure will be applied to any cop killer. Another point is the generalization of minimal sentences for criminals of aggravated violence acts. This law is designated to the gangs that prey on vulnerable civilians and members of security. The measures taken by the Government has divided France in the last weeks.

On November 28 this law will be open for voting, and several French-speaking countries like Switzerland plan to be part of this plan.