BRUSSELS – On Thursday a meeting with the leaders of the European Union was to be carried to promote Europe’s role on the global stage. However it descended into discord over the expulsion of Roma from France.

The President of France, Nicolas Sarkozy swore to keep dismantling the illegal camps of gypsies and rejected the complaints against the French authorities by being racist and abusive against the Roma. 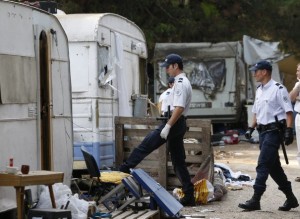 The issue got serious when José Manuel Barroso, President of the European Commission threatened Mr. Sarkozy saying he was going to take legal action against Paris for the deportation of Roma. The French president denied this threat but other leaders and diplomats contradicted it. According to the Bulgarian prime minister, Boyko Borisov the argument between the leaders lasted for an hour “There was a big argument — I could also say a scandal — between the president of the European Commission and the French president,” was Borisov comment to the Bulgarian daily Dnevnik.

Even after the heated debate with Barroso, Sarkozy was unswayed by it and said to a press conference “We will continue to dismantle the illegal camps… Europe cannot close its eyes to illegal camps.” Meanwhile Mr. Barroso didn`t continued with the argument and seemed more inclined to fix the situation “Let’s put this behind us, let’s work now on substance.”

This debate of the Roma puts into question one of the basic tenets of the European Union: the rights of the 500 million immigrants that cross-internal borders. Movement that started since the birth of the European integration, the passing of workers across borders is considered a fundamental right. This subject was legal force in European legislation in 2004.

However France failure to write the 2004 directive to the national law became the reason the European Commission threatened to take legal action.

The importance of social protection was added to the Lisbon Treaty last autumn, which was strongly supported by the French. Hugo Brady of the Center for European Reform said “it was assumed that this would be about highly qualified, multi-lingual, economically mobile work force moving across borders — not about Roma,”

For politicians like Sarkozy, whose fortune is waning, to use the immigrant however this can raise public passions. The French President started this summer with a high police action to evict and dismantle the Roma encampments, hoping to rebuild his electorate on the far right just when his approval ratings are flunking.

The United State Congress and the United Nations stated to various European organizations that the French deportation policy has met hard rebukes and puts into question the strategic vision of Mr. Sarkozy.