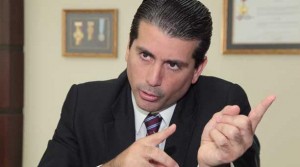 Francisco Alarcón Alcívar, took office this Wednesday as President of the Chamber of Industries of Guayaquil, where he will serve for two years. Likewise, Catarina Costa was appointed Alternate President for the same period.

Alarcón, 44, who is an engineer, has been part of the IGC board since 1997 and for four years has fulfilled the role of Deputy President under the presideny of Henry Kronfle, who left office.

Alarcon said that his priority will be to build bridges of dialogue among the private and public sector and work focused “on promoting a proactive and technical chamber, allowing the development of the industrial sector.”

“When you have clear principles and what must guide the productive development of the country, these do not change with the macroeconomic circumstances which are always changing, we have 78 years as a chamber and have gone through several systems and situations and we can cope with this,” he said.