PARIS, France. Millions of demonstrators protested on the streets for weeks due to the French pension reform that could clear its last legislative hurdle. The French Senate gave its final approval to the bill this Tuesday, passing it 177-151 (despite the nationwide protests). 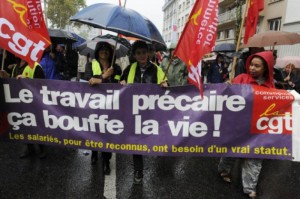 If the National Assembly—scheduled to vote on the bill Wednesday—approved the reforms and President Sarkozy signs them, they would become law.

Government said the measures are necessary because the current system cannot be afforded. The retirement age would rise from 60 to 62.

The Ministry of Education said protests took place Tuesday at four universities around the country.

“There are no winners and no losers in this affair. What is important is to take responsibility, to realize that the economy needs to keep going,” Finance Minister Christine Lagarde told French radio station Radio Classique on Tuesday. “I do not deny that we’ve had several days where there has clearly been an economic impact. I don’t think it’s enough to change our growth forecast for the entire year.”

According to a spokesman for the Ministry of Finance, France’s expected increase in gross domestic product for 2010 is 1.6 percent, a level that has held steady since August.

French workers staged a series of rolling strikes and demonstrations this month and in September.

The government has announced an ambitious goal to cut the deficit from 8 percent to 6 percent of GDP by next year.

Lagarde has said the country cannot continue to pay its debts—to retirees and others—by borrowing at current levels.