Fusarium, what is the strain that attacks the banana plantations of Colombia and Peru?

There is a hypothesis that Ecuador must corroborate in order to act in the most correct way possible. If the strain of fusarium oxysporum cubense or race 4 (FOC R4T) found in northern Peru, near the Ecuadorian border, is the same as found in Colombia, it is almost certain that the fungus passed through here. 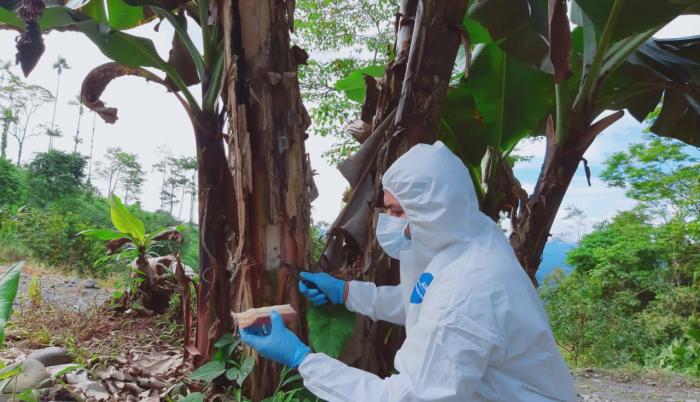 Diario EXPRESO inquired from various sources about the matter, but neither the Peruvian health authority, the Senasa (National Agrarian Health Service) of Peru nor the Ecuadorian, Agrocalidad, know the details. Neither do the unions of the countries know.

María Auxiliadora Rodríguez, head of the Association of Banana Exporters (Asoexpla), highlights the work that the tables do through the national COE, but is concerned that the effects that race 4 has on plantain, which is of the musaceae family (such as banana, orito and abacá).

Has Ecuador, through Agrocalidad, asked Peru to indicate the strain of fusarium R4T that has been detected in its plantations?

“Since the alert was received, not yet confirmed, the Ecuadorian authorities have maintained communication with their counterparts in Peru. Joint work is currently being carried out between national phytosanitary protection organizations in the region, through technical cooperation organizations such as the Andean Community (CAN), the Food and Agriculture Organization of the United Nations (FAO), the Inter-American Institute for Cooperation for Agriculture (IICA) …”, Agrocalidad tells EXPRESO.

Not knowing the strain is a problem, says Mario Cozzarelli, a specialist who visited Peru to do work with aerial photography models who was hired by buyers of Peruvian organic bananas, led by AgroFair, which is also financed by companies like Dole, Fyffes, Bonavio (France).

Cozzarelli is part of the team of the Dutch company contracted for Peru, Opus Insights, which works with the support of the fusarium guru, Gert Kema, of Wageningen University. “We have flown almost 75% of the area of ​​Peru.” The images allow to find presumably affected sites, where confirmation visits are then made.

The problem in Peru is tremendously great and almost uncontrollable, experts point out to this newspaper.

The flights that were carried out are aimed at consolidating the information of hundreds of hectares of small producers on a map that will serve as input to put together a comprehensive prevention strategy before the FOC 4T, says Marcia Herrera, from the Association of Small Organic Banana Producers Samán and Annexes of Peru (Sullana). “As a private sector, we are doing actions in collaboration with Senasa. We have sent to make a map of the banana zone in high resolution to be able to create ad hoc strategies for the banana sector in addition to an intensive training and awareness program”.

The tables that the COE (Emergency Operations Committee) has formed are those of research, financing, water and irrigation, protocols, monitoring and risk map, and although the importance of knowing the strains that affect Peru and Colombia is not known. there are details of official requests from the health authorities.

What has been done is to approve the arrival of supposedly tolerant meristems to FOC R4T, but they have not yet arrived.

What Cozzarelli warns is that generic protocols do not lead us anywhere: “It is impossible to do a generalized treatment; you can’t talk about a protocol. This depends on the geographical areas, the type of producer, it is impossible to generalize “

ANUGA, a showcase to the world for the processed products of 16 Ecuadorian companies