Gabela case “would have been the product of common criminals” 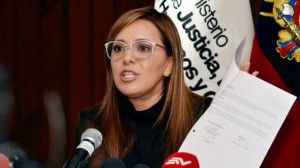 The crime of General Jorge Gabela, former commander of the Ecuadorian Air Force (FAE for its Spanish acronym), is not related with the allegations that made on the acquisition of seven Dhruv helicopters by the FAE.

That’s one of the conclusions of the report of the Expert Consulting hired to investigate the case and that the Minister of Justice, Ledy Zúñiga, made public, yesterday afternoon.

The officer read two documents attributed to Argentine expert Roberto Meza Niella: one called preliminary and one that would be the end. In the first it is determined that the real motive of Gabela, which occurred in December 2010, was not possible.

But that, to date research, death “would have been the product of common criminals”. He ruled out murder hired killers stealing information as possible causal.