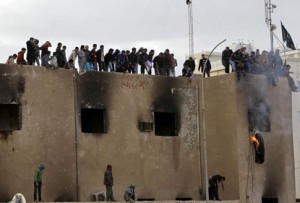 Today, the forces loyal to Colonel Muammar al Gaddafi launched a full offensive on the strategic refinery town of Ras Lanuf in an attempt to remove the rebels that occupy the town for several days. Currently the town is filled with thick plumes of black smoke. The rebels in the west of the city informed that they are under heavy artillery fire.

It is not known if the government is using airstrikes, however, the volume of smoke and the appearance of a large fireball suggested that the refinery might have been struck, there is still no confirmation about this. The snipers of Gaddafi shot anything that moved in the main square of Zawiyah, which is currently held by rebel forces.

Several bodies were lying in the ruins of the destroyed buildings by air raids that occurred earlier in the week. The streets of the city are empty. Meanwhile the rebels are trying to escape to the west after the setbacks of last Tuesday, when they tried to move to Tripoli, the capital and Gaddafi’s base. This Wednesday hundreds of rebels’ fighters advanced more than half a mile to the west before the government forces attacked them.