Downtown Puerto Ayora looked almost empty on November 18. Businesses that used to be crowded with tourists only have a few clients. A group of young people sitting chatting in the main square of the city and some taxis break the unusual silence. 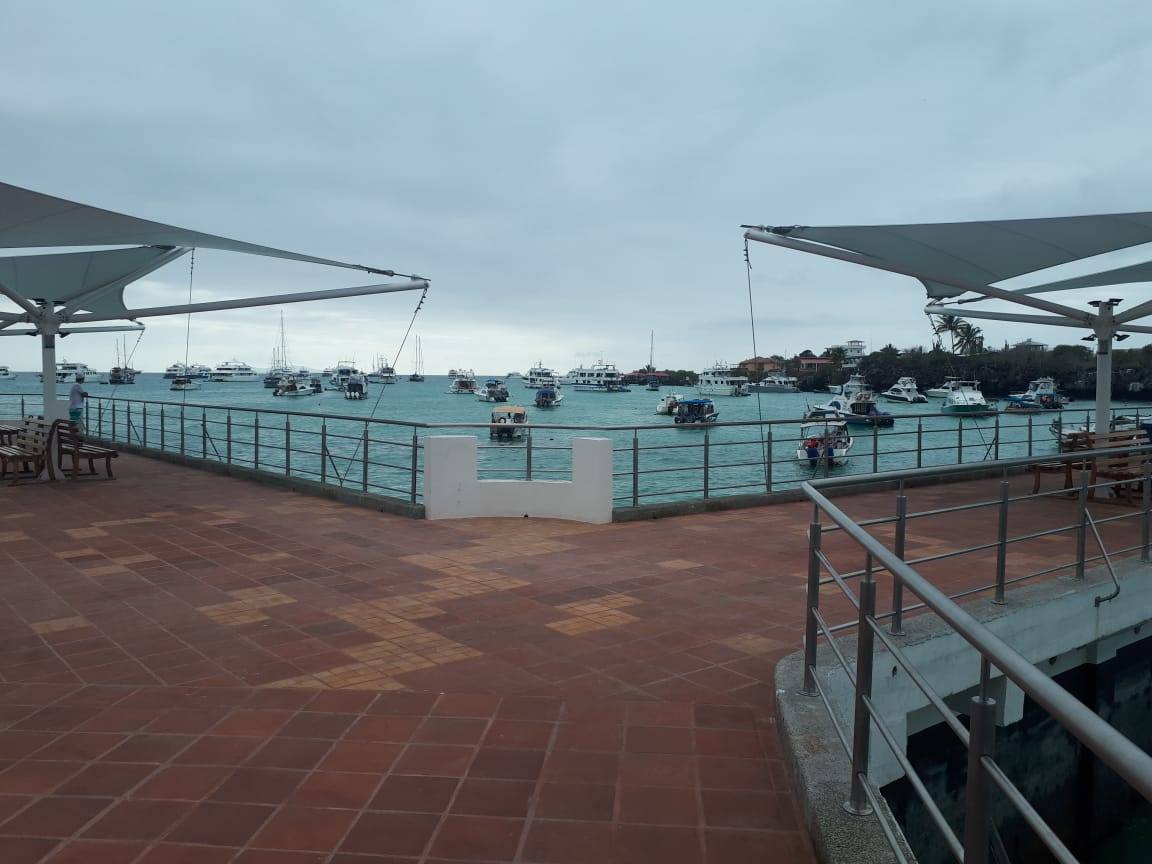 This is the reality of the Galapagos caused by the pandemic. Guides and tourist service providers without employment. Restaurants without diners.

At the dock, dozens of boats are docked waiting for a visitor to arrive so they can leave. The sound of a small fiber attracts the attention of the few people who are on the site.

A small group of national tourists get off the boat. The joy they radiated was overshadowed by the masks on their faces. María Ruíz was one of the passengers. He says that he was encouraged to go to the archipelago to forget the dark months of March and April. She is from Guayaquil.

Together with her husband, they analyzed the possibility of “touring” “somewhere” within the country. Looking for options they decided on the enchanted islands. It was his first trip to the Galapagos.

However, having a PCR test up to 96 hours in advance and presenting a safe-conduct that is issued by the hotel where the visitor will stay and that must be approved by the Ministry of Tourism almost makes her regret it.

Although he understands that biosecurity controls must be strict for the “good of all”.

Already in the archipelago he enjoyed the wonders. Wolves on the dock, snorkeling with sharks and the beautiful beaches. She feels “proud” to have contributed “something” to the economy of the islanders.

Andrés Vergara is a naturalist guide in Santa Cruz. After eight months, he was only able to accompany a group of journalists who snorkelled off Santa Fe Island last week. Seven days earlier he was able to “guide” another group of visitors in a specific activity.

They are the only jobs that he has done in his branch during the pandemic.

Before the appearance of the virus, there were 12 to 15 excursions each year lasting more than a week. He relates that these months have been hard and that the only thing he has to do is “survive”.

Instead, Carlos started selling breakfasts with his wife, since the hotel where he worked does not receive tourists “for months.” She gets up very early every day to help cook. The hard effort is not totally rewarded, since, most days, they are “stranded”.

The economy is critical even in the neighborhood stores , says Luisa. Your grocery business reports low sales. She was selling an average of between $ 150 and $ 200 a day last year, but currently only goes to $ 60 and only “a couple of days” a week.

The person he hired to help him in the business had his working hours and also his salary reduced by 50%. In the block where he lives, he says, the “little shops” have proliferated. Her neighbors, including guides, who have lost their jobs, take out “their little table” and sell “whatever little thing” or prepare tortillas to generate income.

She tries to help her unemployed neighbors and trusts them with food. You have accounts receivable of more than a thousand dollars. “They ask me to trust them with two pounds of rice and eggs, most of them have young children and it breaks my heart to refuse,” he says.

A safe destination to travel

Carlos, Andrés and Luisa invite national and foreign tourists to visit the islands, since their economy depends a lot on them. They affirm that the archipelago is a safe place where COVID-19 has been controlled in an “efficient” way.

The president of the Galapagos Governing Council, Norman Wray, agrees with this. In fact, a few days ago the Ministries of Tourism and Health delivered the ” safe travel ” seal to the archipelago, an international certification for having the necessary biosafety protocols and good processing of PCR tests.

According to an analysis carried out by EL UNIVERSO to official figures, until Sunday November 22, Galapagos was the best tested province in the country with 147 tests processed per 1,000 inhabitants.

In the month of July, 435 people arrived on the islands, a figure that was achieved in a single day before the pandemic. Fortunately, says Wray, the number has been increasing, with more than 3,000 visitors registered in October. 85% of the inhabitants depend on tourism.

Unlike other years, in recent months more national tourists have arrived.

Wray emphasizes that Galapagos is a safe destination. However, he understands people’s fear of traveling, especially those living in countries of origin that are heavily affected by the virus.

The economic impact caused by the pandemic has increased the pressure on the archipelago’s natural resources, putting at risk the most vulnerable ecosystems of this UNESCO World Heritage Site and complicating efforts to conserve its biodiversity, says the United Nations Program. for Development (UNDP) in Ecuador.

The UNDP, together with the Government Council of Galapagos and the University of San Francisco de Quito, created the fundraising campaign ‘Save the Galapagos Islands: Empower its people’ focused on supporting the economic recovery of its inhabitants through the reactivation of employment and training activities.

As a result, the local population will have the possibility to improve or create small business ideas to promote sustainable entrepreneurship in the community and at the same time take care of the natural resources of the islands.

Carlos, Andrés and Luisa are grateful for any initiative to achieve the economic reactivation of Galapagos. They are hopeful with the announcement of the effectiveness of the vaccines against COVID-19 and that they will soon arrive in the country. (I)