Germany and France urge Russia to maintain the ceasefire with Ukraine 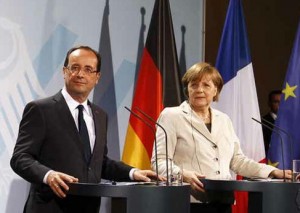 With the purpose of maintaining the ceasefire between the Ukrainian government and the separatists from the pro-Russian east, which expires at 19:00 GMT, Russia, Ukraine, France and Germany hold telephone talks this Monday.

According to the Interfax-Ukraine news agency, spokesman for the National Security Council Andrei Lysenko, said: “The decision on the extension of the anti-terrorist operation will be taken before 22:00 (19:00 GMT).”

Angela Merkel, Vladimir Putin, Petro Poroshenko and François Hollande will conduct this Monday another meeting, at a time that has not been specified, after discussing the situation for two hours on Sunday.

German Chancellor and French President took the occasion to ask again the Russian President to make efforts to calm the situation in the pro-Russian separatist east.