The news about the arrival of murderous hornets in the United States causes concern in Ecuador . A video that began circulating yesterday, Thursday, May 7, 2020, on social networks shows a large flying insect , which would have been found in Daule . 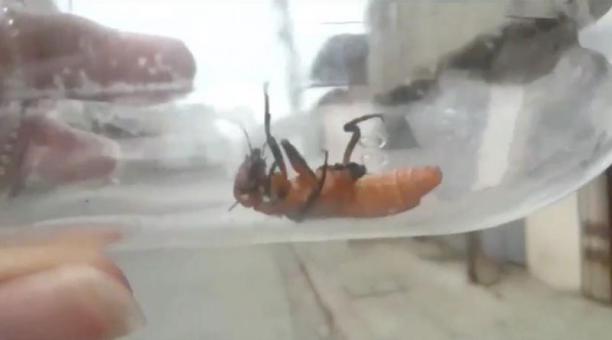 “Be careful, we were in Daule with the family and we found this bug that almost bit my dog , but we don’t know what it will be. As the news about the bees goes , we are traumatized, “says the person who recorded the video. While recounting the situation, the man focuses on the insect , which is trapped in a plastic bottle .

The person who recorded the video refers to the news spread by international media about the presence of the Asian giant hornet in Washington state . These are the largest Hornets world , attack the colonies of bees and their sting is considered potentially fatal .Ante this alert, the Entomological Society of Ecuador (SEE) issued yesterday evening a statement in which it clarifies that in Ecuador There are no records of the Asian giant hornet (Vespa mandarinia).

This insect lives in areas with four seasons and hibernates in the autumn and winter seasons, so it is limited to living in regions that meet these environmental conditions.The insect shown in the video on Daule, explains the SEE, is probably a Cissites maculata . This is a native beetle, belonging to the Meloidae family, which is completely harmless . According to specialists, it is necessary to clarify this misunderstanding to avoid that, due to fear, attacks are made on species that are beneficial to the environment . These are necessary for the control of pests in crops .

If there are doubts about the threat that certain insects represent, the SEE explains that you can send the concerns or images to the email info@entomologia.ec.