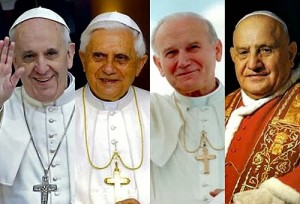 Francisco will sanctify tomorrow to the polish Juan Pablo II and italian Juan XXIII in a ceremony that rise to the glory of the altars to two popes who changed the face of the Church in the twentieth century.

Hundreds of thousands of people, heads of Government and State, including the Kings of Spain, the Presidents of Ecuador, Honduras and El Salvador, will be attending the solemn ceremony in the St. Peter’s square to sanctify to the popes, one of them a humble and close to the people and the other charismatic and capable of seducing the crowds.

The idea of two Popes Saints and two Popes living raises many expectations since it would become the “day of four Popes”, an unprecedented time for the ancient institution.

The ceremony in St Peter’s square will be celebrated by 150 Cardinals, thousand bishops and 6,000 priests. Also attending representatives of all religions.
The celebrations begin today with a ‘white night’ of prays in 15 churches in the historic centre of Rome.

In total 19 giant screens will be installed throughout the city and St. Peter’s square, as well as in key locations, including the people’s square and the Imperial Forum. The ceremony may be followed in several languages, including Spanish, Portuguese, Arabic and French both live in deferred. The basilica of San Pedro will remain open until one in the morning so that pilgrims from all over the world can pray in the largest temple of Christianity.

Albuja rejects report of the Commission for `falsehood and misconduct´