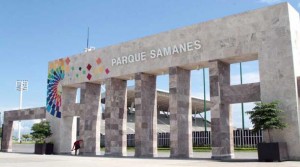 In December 7, 2010 representatives of the Ministry of Environment and of the Institute of Social Security of the Armed Forces (ISSFA) accepted the 11 clauses of the contract.

In one of the points price is mentioned: USD 48.2 million for 66 plots of land located where today, February 11, 2016, the Samanes Park is erected, in northern Guayaquil.

Today, the value of that land generates disputes between the ISSFA and the Government, to the point that the Ministry of Finance announced it will deduct $ 41 million from the military insurance for an alleged overpayment.

The decision was provided despite what was stated in the conditions of the purchase contract. The eleventh clause says that the ISSFA and the Environment Ministry will solve possible disputes through mediation procedures in the State Attorney General´s office.