Representatives of the Executive and of the indigenous movements participated in a dialogue table, chaired by the Ecuadorian Episcopal Conference, which managed to put an end to the national strike that began on June 13. 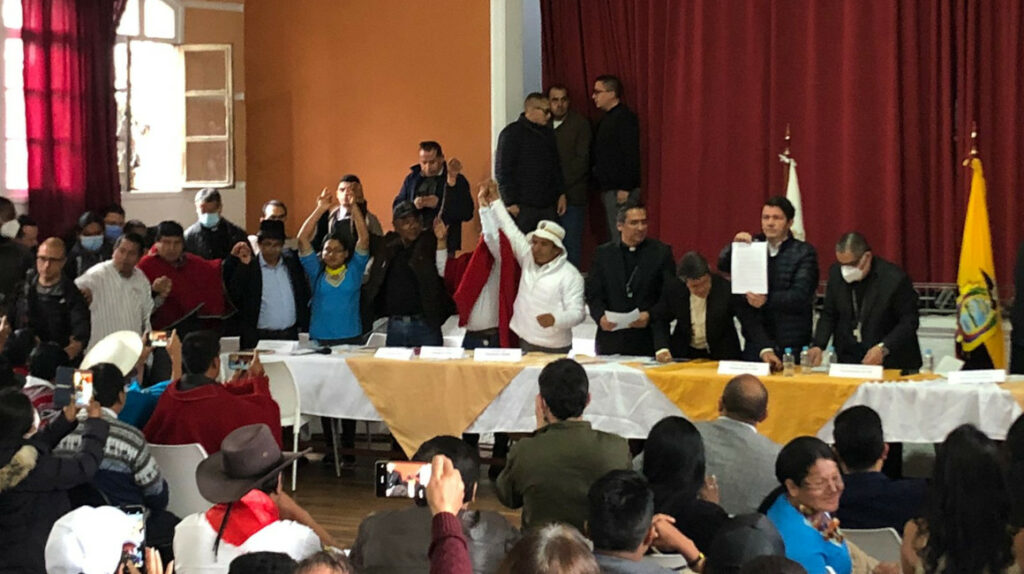 Signing of the agreement between the Government and the indigenous organizations that put an end to the national strike. Quito, June 30, 2022.

The national strike enters its 18th day with its sights set on the dialogue between the National Government and the Confederation of Indigenous Nationalities of Ecuador (Conaie), in Quito, the results of which were made public at noon on June 30, 2022.

In the negotiating team on behalf of the Executive was the Minister of Government, Francisco Jiménez; the Foreign Minister, Juan Carlos Holguín and the Secretary General of the Presidency, Iván Correa.

While on the side of the indigenous movements were the presidents of the Conaie, Leonidas Iza; de la Feine, Eustaquio Toala and de la Fenocin, Gary Espinosa.

Monsignor Luis Cabrera, president of the Ecuadorian Episcopal Conference, presided over and facilitated the dialogue, accompanied by eight other religious.

The development of the document was built between the negotiators in private , although Iza later denied this and said that it was a proposal from the mediation commission.

The representatives of the Executive and the indigenous movements signed, after a mediation led by the Ecuadorian Episcopal Conference, the so-called Act for Peace in which the agreements reached to achieve the end of the national strike that began on June 13 are detailed.

The agreement that ended the strike:

The document includes the following executive decrees signed by the President of the Republic during the strike:

To these offers that have already been launched, the agreement signed by the parties includes:

With these agreed points, the indigenous movements promised to demobilize their bases and open all the roads that were blocked by the national strike.

In response, the Central Government promised to repeal the state of emergency as the situation in the country returns to normal.