Government closes its offices in Washington due to snowstorms 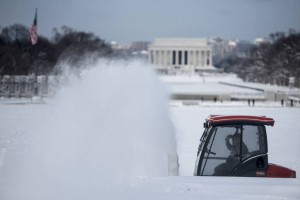 Snow and wind storms have strongly affected the northeastern of the United States, prompting the government to close all its offices in Washington, like most schools and public transport. It has also affected several southern states with frost and snowfall.

These storms have battered Midwest (Missouri, Arkansas, southern Illinois, Tennessee, Kentucky, Indiana and Ohio) and the Middle Atlantic has been displaced eastward causing a state of emergency in Northern Carolina, Virginia, Mississippi, Georgia, Kentucky and the nation’s capital, Washington.

The National Weather Service warned that it is expected “another round of cold Arctic air” to come, which would affect most of the east of the country leaving record low temperatures.

North Carolina, South Carolina and Georgia ordered the closure of offices and schools because of the storm, which left 200,000 people without electricity.